An Indian Geologist Mr. Vara Prasad who visited Bhutan to survey  and to study the environment  as a part of construction of ACC cement factory  shared his Bhutan experiences with Venkat poolabala.

Here is the story in brief. Bhutan is a remote and mysterious region for many people.  Those who see from remote countries only hills there. They might call this land locked country.  Being close to Bhutan  Indians should not  miss this opportunity of visiting  this exotic area with its unique culture, rich history and very friendly people. This is a rare opportunity not to be missed! Bhutan is a country without noise.  Bhutan has wonderful culture and calmness.  When Hyderabad population was 14 lakhs the population of Bhutan was 7 lakhs.  Slowness and peace are the two rivers that flow through the lives of Bhutanese.  You can make the most of you visit.  Bhutanese were quite traditional. Television was banned( now allowed) not many newspapers  but Schools and colleges are plenty in Bhutan. Bhutan also hires Indian teachers. Mr. Vara Prasad met a few Indian teachers in samdrup jonkar.  Samdrup Jongkhar is located in Bhutan - about 208 km East of Thimphu, the Bhutanese capital.  The unexplored terrain certainly deserves the attention of nature lovers as well as tourists.   From Gauhati Sandrup jonkar 65km by train. It is the district Head quarters full of flora and fauna. 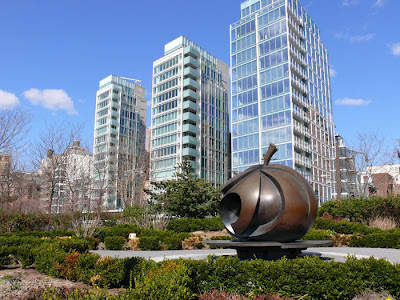 Yes  it is the policy of Bhutan government to maintain forest land and nature.  Sixty  percent of the country should be forest.  Sounds great!! Doesn’t it?  The land of the thunder dragon kingdom is a travelers paradise and an environmentalist’s dream. With 72 percent of the country under forest cover. The men and women of Bhutan have their traditional dresses. They should wear them. It is mandatory. We can see the ascending  roads  pass through a variety of vegetation zones in the Himalayan foothills. Looking back we get a distant view of the Indian plains. The roads are so high that we may be above the clouds! The roadside is rich in plants including ferns, rhododendrons and primulas. Women wear traditional dresses. 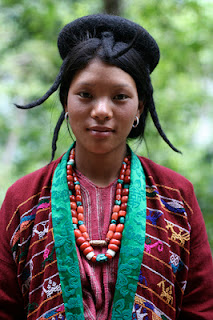 Among many things of decent attraction, the culture is the biggest attraction.  If you visit Bhutan it gives you a chance to see how Bhutan has managed to hold on to its cultural traditions.  Bhutanese are Buddhists.  Mahayana Buddhism provides the essence of a unique identity for the 700,000 people of Bhutan. They don’t crave for western culture like Indians.  Their ability to respect their culture is remarkable it is reflected in retaining their culture. Archery is their national sport not cricket. India and Indians must learn from Bhutan. 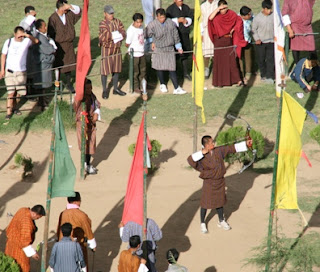