How to become a Polyglot?

Polyglot is a person who speaks many languages.
At least a person should speak three languages to be called a Polyglot. 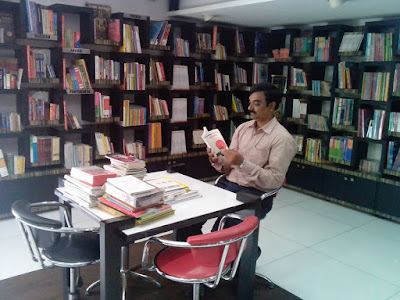 Many people have the desire to learn Foreign Language. Some people can not begin due to financial reason. Some people begin but can not progress  for want of  self confidence.  Self doubt takes better of the aspirants.

I never had the slightest doubt because I was not learning but enjoying foreign languages. To be more precise I was listening to the French songs. French songs attracted my senses. It became a passion to listen to the French songs. Soon I started singing. This is how  my journey into foreign languages began. In no time I began learning French systematically. I have learnt language after language.. German, Spanish, Italian, and Japanese  Let me tell you where this passion has led me and what I have achieved. Apart from the external accomplishments I have achieved the joy of inner fulfillment which in my view is more precious than the external accomplishments.

A role model is great strength to navigates you to your polyglot target. You know former Prime minister P.V Narasimharao. He is the source of inspiration to me.  Even when he was very busy as Prime Minster he never put aside his love of literature. He has translated Veyipadagalu ( Telugu) into Hindi as " sahastra phan' I translated the same yeyi padagalu into French.

The milestones in my journey:
The first milestone: Veyipadagalu  is a thousand page Epic novel by Viswanatha satyanarayana sastry that won sahitya academy prize. I had to read the book three times to translate it into French. I would have failed had it not been for my passion. The translation has led to a great discovery. I discovered my own inner strength. Many people have half read Yeyipadagalu because of its size. They complain hat it is voluminous(very big.)  Passion knows no boundaries. 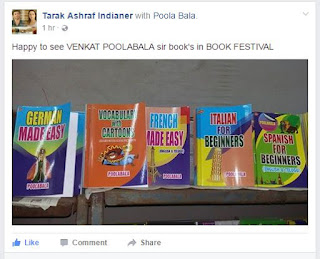 A national Level seminar on French and German Classic literature was held at Ernakulam in the year 2012 on September 14th and 15th.

I was invited to Ernakulam to speak on French and German Classic Literature. I participated as a resource person @ National Level seminar at Aluva in Kerala.  I think that the invitation is  the greatest  reward in itself as it is the life changing force. 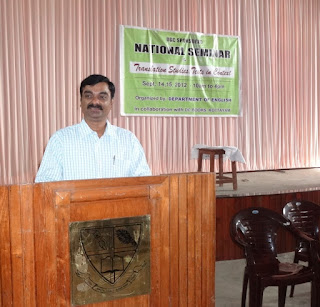 what is more is a  re invitation to teach French in Kerala. when I received the invitation to speak at the National level seminar I stopped teaching for a month and dedicated fully to the study of classic literature in French and German.
I have selected the french and German books that have won noble prize for literature along with other classics like Les Misérables , The Little Prince,  The Stranger , The Three Musketeers. From German language I have selected   The Sorrows of Young Werther,  Death in Venice Thomas Mann ,  Siddhartha by Herman Hesse, and some modern by Nobel prize winning books like Atemschaukel by Herta Muller and  Hunger Angel.

I confined myself to room and never moved anywhere nor shaved. Since I never worked the whole month I never had any income. I thought "Money comes again but this opportunity will not come again." 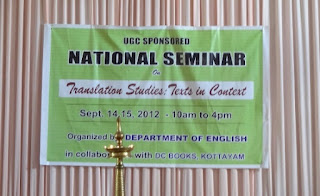 I have always loved languages and enjoyed reading literature.  when I was young I loved Shelly, Shaw, Shakespeare. I admired their stories plays and poems. I never knew that it was a journey of thousand miles at that time. I never thought that one day I would become a foreign languages teacher. To my surprise now I am into  major languages of the world, French, German  Spanish, Italian, English and Japanese.  I started learning korean too.

Even English is heavy for many adults.
They ask me "why foreign languages?  I firmly believe that unable to admire literature and  failure to appreciate and understand life is one and the same.  I am empowered by languages  to think more widely; experience more vividly, express more clearly. It is a journey into the hearts.  Deo gratias.

Now I am able to speak 6 foreign languages; French, German, Spanish, Italian and Japanese. I can improve my  korean language too. Those who criticized me are still struggling with English.  I have started a Foreign languages Institute in Vijayawada to teach foreign languages to interested learners.I never had anybody to guide me in those days.   I fought all by myself  but today you can access  foreign languages  more easily . All you need is passion guidance and training are readily available.