Is Nityananda a laughing-stock or a towering spiritual personality? 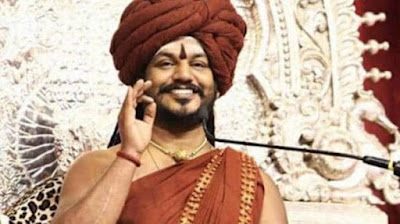 You might have seen many videos of Nityananda. These videos reveal the personality of Nityananda. You must have developed an idea of his personality. Basically any video or presentation reveals either the knowledge or perspective of the presenter. Most people see only what the presenter intended to show. A few people who can think, reason (provided they have highly sophisticated and in depth knowledge) will be in a position to understand the truth. I saw a video of Nityananda yesterday which my friend had sent me. It was a short video that makes him a laughing stock.  This is what he spoke in the short video.

“Me who is residing in me can see Me residing in you. The Me living in Me through Me can understand Me residing in You.”  That all people start laughing.  Laughter is pretence to cover ignorance.

As a Teacher of Foreign languages It is my experience that when I speak in German or French or Spanish fluently for a while , the students had a dazed look.  Quickly I comeback to Telugu or English and start explaining the what I had spoken. Since it is a language class they would excuse me. When I speak in sophisticated English language before academic students they would complain but if you use the same sophisticated language before ordinary masses they would mock, hoot, mimic and pass comments to make you a laughing stock.

First you should have the basic knowledge of science. Later you should try to understand big questions in science. Finally you may try to go for the ultra science ( spiritual science).

If you ever tried to answer the big questions in science you would understand how confused the world’s top notch scientists were.

What is the Age of Universe?

Scientists estimate the age of the universe by using the movement of stars to measure how fast it is expanding. If the universe is expanding faster, that means it got to its current size more quickly, and therefore must be relatively younger.  When the expansion rate is slower the universe would take more time to reach current state. So it is older. ( Big bang is a guess work. Nobody is sure.)

Jee is from the Max Plank Institute in Germany, lead author of the study of astrophysics. He puts the universe at around 11.4 billion years.

NASA's super telescope and came up with 13.772 billion years, with an uncertainty of 59 million years.

What is the Shape of the Universe?

All other cosmological data suggests the universe is flat, meaning it has no curvature, similar to a sheet of paper.

But Planck measurements indicate that it could be “closed”, or spherical, which would mean that if you travelled far enough in one direction, you would end up back where you started.

What is the Size of the Universe?

it is possible to measure the size of the observable universe, which is currently estimated to be 93 billion light-years in diameter. But many cosmologists say, no, there are an infinite number of galaxies in our infinite space. So the universe is infinite.

Where is the end of space?

Some scientists say 93 billion light years. Others say Since the universe is 13.8 billion years old, light from a galaxy more than 13.8 billion light-years away hasn't had time to reach us yet, so we have no way to know the end of the Space.

The shape of the universe is egg shaped (brahmanda).

All are scholars are great. Can we mock at anybody based on the differences they have?

We often belittle great people based on their Sexual orientation or sexual relations. Without understanding anything whatsoever.  We often take sexual relations or desire as yard stick to measure one’s greatness or meanness.

Popular personalities, ordinary people, God men and even Gods have  different kinds of sexual relations. but they are not mean people or fools.

(Tara, grew bored of her husband Brihaspati, Once she visited the land of Chandra, the moon. She instantly fell in love with Chandra and was enamoured by his youthful looks and his skills of lovemaking  and eventually eloped with Chandra. Finally came back to her husband with a child. Similar stories are plenty.  Kunti  having children by other people with husband’s permission. Yayathi giving his daughter Madhavi to Galav who in turn sent her to several kings. Arjuna married Subharda, Brahma desired Saraswati.  Yami desired Yama. Without through knowledge of History and mythology those relations should not be judged based on the current day society. )

Nityananda’s knowledge cannot be belittled When you don’t understand his speech. Nityananda speaks to you he takes you to the loftiest heights of philosophy.

Nithyananda has set up the 'Republic of Kailaasa' on an island off Ecuador in South America, declaring it the 'world's greatest and purest Hindu nation'