Personality and Sex - Gandhi and Kamaladas


The dissimilarities are Gandhi and Kalamla Das belong to two different fields,  two different sexes, they have different sexual urges, Kamala Das liberated and fulfilled (her desire by having an extramarital affair)  while Gandhi restrained but both have the guts to practise and the audacity to express. Both regretted their mistakes openly. Gandhi regretted having sexual  desire when his father was on the death bed. Kamala Das regretted changing her religion. She has the openness to say that converting to Islam was not worth. 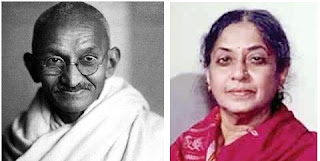 Born on 31st March, 1934 in Kerala, Kamala Das lived a culturally enriched childhood, thanks to the influence of literary luminaries like Balamani Amma (her mother) and Nalapat Narayana Menon (her grand uncle) in her early years. Her love for writing began at a very young age. At the age of six, Ms Das created a rudimentary magazine of poems, where she would write sad poems about dolls that had lost their heads and were doomed to remain headless for eternity. The early years of her life were spent shuttling between her native home in Kerala and Calcutta, where her father, VM Nair, was posted for work.


At the age of 15, Ms Kamala was married to a banker officer - Madhava Das - much older than herself. The couple moved to the erstwhile Bombay, which is where Ms Das took to writing professionally.  Kamala Das wrote extensively under the pen name of Madhavikutty. Her writing, whether in English or Malayalam, had strong feminist leanings and she didn't shy away from discussing sex and sexuality in her stories and poems. One of her earliest published works, Sthree, a story that was published in Mathrubhumi Weekly in 1947, when Ms Das as barely 13, had lesbianism as its central theme.


Through the 50s and 60s, she continued writing in her signature confessional and graphic writing style, talking about women's issues - struggling with sexism, understanding and experimenting with their own sexuality, childbirth, love, desire, loneliness, being stifled, emotional disillusionment. Her undeterred style and volume of poetry-writing led her to earn the label of 'The Mother Of Modern English Indian Poetry'.


In 1972, when her family was faced with financial trouble, Ms. Das had to focus her energies on writing columns, because they paid better. She started writing for a popular Malayalam weekly, Malayalanadu, in the same brutally honest tone of voice and on controversial subjects. A compilation of Ms Das columns was published in 1973 as Ente Katha, an autobiography. It was a serialised version of her ruminations about her teenage love for a neighbour, her feelings towards her failed arranged marriage, the birth of her children, the extramarital affairs she had, and even experiments with sexuality.


In 1977, Ente Katha as translated into English, while borrowing from the 1970 memoir she had started writing in English, but had later converted to Malayalam and used as the raw material for her column. The English version of Ms Das' autobiography, My Story, too was a considered a literary sensation and remains one of the most popular and controversial autobiographies by an Indian author.

Ms Das' popularity and list of awards grew - she has won the prestigious Sahitya Akademi award, Asian World Prize, Kent Award, Asian Poetry Prize, Ezhuthachan Puraskaram, and many others - so did her tryst with controversies and contradictions. In 1999, at the age of 65, Kamala Das converted to Islam and assumed the name Kamala Surayya.  I had discussed my strong feelings about Islam with my husband. He advised me not to treat the issue lightly. He felt religion could not be changed as easily as we change our clothes. He advised me to study it deeply and only then take a decision... I thought about it a lot. I have been nurturing the idea in my mind for the last 27 years. I had been thinking about conversion for the last seven years, but put off my decision for one reason or another."
However, in the twilight years of her life, in an interview with The Hindu, she admitted that she regretted making the decision. "I fell in love with a Muslim (man) after my husband's death. He was kind and generous in the beginning. But I now feel one shouldn't change one's religion. It is not worth it."

The vow of Gandhi’s brahmacharya was popular.  Gandhi spoke about Brahmacharya passionately and emotionally. He told the teen girl to serve him in this holy purpose. Basically, he manipulated his grand-niece Manu to fulfill his vow. Yes, she voluntarily slept with Gandhi naked and was forced to use a single blanket.

After 1946, when his wife Kasturba died after prolonged illness  Gandhi  made experiments with his grand-niece Manuben Gandhi - a young teen girl - often seen in the pictures assisting Gandhi wherever he goes for walk - to sleep naked with him in the same bed.

The popular leaders of Congress Vallabhbhai Patel, Jawaharlal Nehru and many of his close aides even confronted him and asked him to stop this . But Gandhi refused and instead replied he is experimenting his Bramacharya.

Even Manuben acknowledged she slept and bath with him naked. Worst of all she was not the only girl he groomed for his perversion. She suffered from life-long psychological problems and was harassed by seniors Indian leaders to not divulge the truth in public but Gandhi did.