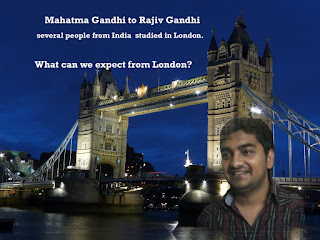 London  gives a wow not only to the visitor but also to the writer and the reader who writes or reads about it. Many people wrote about it many times. Yet, each time it made a difference. This interview focuses on the education system, social life and culture in U.K  Mr.Sravan from Vijayawada who studied in London speaks on Life in London. People in England, like other parts of the world hardly need to blow horns of their vehicles but still accident rate is very low. In India sparing the horn is wrong. you can blow off the brains with your horn. Horn is not only expected but also demanded. In UK people fly off the handle when horn is blown at them. They may gift the blower a slap. In India we often experience loud talk talk in small hotels, especially at tiffin and meals sections but people in England are silent in public places in contrast with the noisy people in India. In London or the U.K for the matter if the customer is not satisfied with the food served, if he expresses his dissatisfaction the hotel management will not charge money. Here in India once I said the same thing to the hotel management when the food was bad.  The hotel management picked up a quarrel with me. Time is precious in London. They respect time and follow it. Any function or any program in the UK starts on time. But here in India we wait for the last man, the late comer, as if his time is more important than that of all others who came in time. We need to ask ourselves a simple question " Is the time of the late comer more important than those who came early? Education in England is very practical. They assign the work to the students and the students are expected study and write on their own. Learning by heart or copying or downloading from net attracts serious warning and punishment. If two students write alike the professor will not accept. Compare the lakhs of students in India who read the same guide with students in the U.K. Mr. Sravan said that  he was made to stand before a committee(as we see in movies) and expiate for using internet stuff. Minors (children until 18) are taken utmost care of by the government. Even nail polish is not sold to them. They have the complete protection from the law. Even scolding them is a serious offence. Sometimes Mr. Sravan and friends have seen minors begging when they were on the way to the university but they were scared of scolding  them.  Adult beggars in London are different from those in India. They don't beg showing their poverty or misery as Indian beggars rather they show their art. Some beggars play the guitar while others paint on a canvas set on easel.  There is grace and dignity, silence and puntuality, dignity of labour and respect for customers in the UK. What they don't have is plagiarism and we have it here plenty.
Posted by poolabala at 5:13 AM