Good literature has influence on the country,  society and individual as well. a decade ago  students were limited by text books. Today students are limited by exams. They read just for exams  and just before exams. We hardly find a student or teacher who read an article a book.  In countries where people read extensively where good literature is honored , there we find the society thriving in peace and security. Good literature is far more important than good technology because good literature can give us good behavior.

On 3rd October what began as an awareness program on Foreign Languages for the young children ended as a highly inspiring unforgettable rare edutainment program.

Showing Videos of Children speaking in French, English and other foreign languages to the students of Z. P. H. School Vanukuru near Vijayawada, Andhrapradesh.


My Italian friend Maria Esposito once wrote "the future of a country is seen in the schools" I believe  her words to be absolute truth. I hope you too would believe in her words. Then this post is worth reading. this post is about how I put that belief into practice. It is a year ago early when I moved to vanukuru I met the Head Master of the Z. P. H.School Vanukuru Mr. Prasad and asked him for an opportunity to educate the children of his school on Language skills. His response was fairly good but what avail? I have n't received any response even after many months.  In the month of May I wrote in my FB which shows both my commitment and disappointment.

On 8th May I have posted 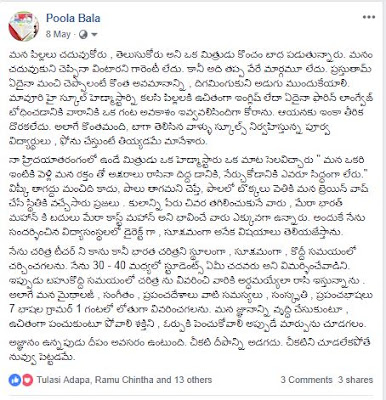 It was Gandhi Jayanthi , I again thought of the Z.P school and the Children. I called the Head Master of the School. He did not answer the call.

I called him again. This time fortunately he answered my call. I reminded him of my visit and explained him the purpose. He consented and gave me one hour time between 12.00 pm and 1.00 pm. 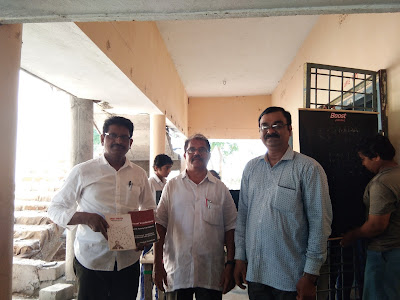 
I have gifted my Cartoon vocabulary books to the school library and Children who actively participated in the program. I can surely that the village children are a lot better than the children in corporate school children. The village school children deserve better knowledge. They must be educated and helped. This is my mission. You too can invite me to serve your school.

Finally it is the Children you and I are interested in.

Posted by poolabala at 7:59 AM