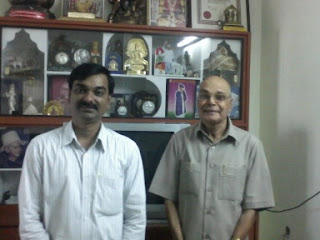 Veteran journalist, virtuoso orator, intrepid speaker, éclair of the stage and epitome of values, his versatile persona etched a niche for him, won him laurels. This champion of awards Turlapati is the pride of  and prodigy of Telugu. At the vertex of his life the octogenarian is simply lively and seriously forthright.

Kutumba Rao, the denizen of  was born here in 1933. He started his journalistic career at a very young age. He served as a secretary to the first Chief Minister of Andhra Pradesh Andhra kesari T. Prakasam. He is the man who wielded his pen and tongue alike. As a writer of more than 4,000 biographies he made an indelible mark on journalism and as an orator he addressed more than 12000 public meetings and received numerous titles and awards of excellence. In fact he is both wetted whetted in the volley of awards such as International Man of  the year, World Life time achievement award, National Citizen Award. Only a voluminous book can justify Turlapati’s work. It is hard to fit him into a book, harder still to fit him into a booklet and hardest to fit him into an article. His journalism is six years of saga and his life is eighty years legend. He received accolades from the editors of the Guinness book. Talent has no boundaries many people believe it and some people prove it. Turlapati’s life and work are manifestation of this fact. American Biographical institute honored him with “20th century achievement award.” International Biographical centre  honored him with a “Special award” for his outstanding work.  He was also appointed the honorary advisor, International Biographical centre, . Japan Broadcasting Corporation recognized him as The Best Biographer and televised a special interview with Kutumbarao. He edited the book Assembly 2000 a book containing the life sketches of 294 members of The A.P. Legislative Assembly. This is first of its kind in the state.  He was conferred Pratibha purskar by   and Kalaprapoorna by . He was honored by Dr.Shankar Dayal Sarma the then Governor of Andhra Pradesh with a gold medal for his services in journalism. He was the first journalist from Andhra Pradesh to receive Padma Shree. The people of  showed their fervor to Turlapati by felicitating him with a gold bracelet. The street where he lives was named after by him by the Municipal Corporation of . Blessed is Turlapati who served his mother tongue mother land. The first governor General of India Rajagopalachari conferred on him the title “Guardian of Telugu.” The title is apt to him. His humanism was not as much eulogized as his journalism and patriotism. His humanism lies on the surface and reflects in his manners, manifests in actions. Verity is the inspiring virtue in Turlapati. His innate ability to call a spade a spade, his transparency even in matters of his own culture are remarkable and the youth of this generation should learn lessons of self respect  commitment to profession and command on history and culture from him and above all the quality courage to be unbiased. A random talk with Turlapati is edification. He was member of Planning Board of Bharati Dasan Univerity, Tamil Nadu and Central Film Censor Board.  Governments in  and universities in  and abroad have made use of his services. The society especially the present generation of journalists, teachers and educated young men and women can benefit from his rich experiences then only and only then we can consider that the knowledge of our ancestors has percolated to the grass root levels. This talking book Turlapati has shared some of the interesting experiences of his life and times in a recent interview he has extended to journalist.

What is the influence of electronic media on journalism ?

When there is an allegation on someone the media should approach, clarify and take the statement of the person facing the allegation and should present  that statement along with the allegation. Well, electronic media isn’t fair in this regard. A north Indian T.V channel showed an adultery allegation. The clipping was showed repeatedly. But they didn’t bother to show what the accused has to say. The man charged with adultery was innocent. He committed suicide because he is innocent and sensitive. I think media should be fair enough while dealing with such allegations. Otherwise many innocent people may die. The media should refrain from peeping into the personal lives of individuals.  The case of Ambati Rambabu is known to all of us. So media is troubling or vindicating persons. Media should not be a tool for such purposes. The golden rule in journalism “News is sacred comment free”

How is the  quality of programs electronic media?

The media created and has been creating lady villains which is a popular concept in all TV serials. These programs are sending wrong  signals and creates a poor picture of our Telugu home environment. This undesirable trend goes unabated. Since ages women has been traditionally exploited.

what is the difference between journalists in the past and present?
In the past journalism was unblemished, but today it is tarnished. Journalist in the past maintained values and enjoyed high degree of freedom. Now-a-days they have no freedom. They are puppets in the hands of media barons so freedom of press is to be understood as freedom of press owner. In those days News papers or magazines were known by the editors. People used to read newspapers taking the editors into consideration. The main consideration of the reader in those days was the editor. Today nobody knows the real editors. The capitalists are the editors. A newspaper is known by its owner.

What are the standards of journalism today in comparison with journalism in your days?

There is no freedom of press today. All most all newspapers and TV channels side with some or the other political party. They design their programs based on the agenda of owners. Journalist can not have their views and opinions. Even if they have they can’t express them without the consent of the owner.

Perhaps in 1937 Kotanraju Ramarao was the editor of National Herald, Nehru was its founder chairman. In the same year when Nehru spoke at a meeting in  his statements hit headlines in all leading dailies. But the editor of National Herald did not consider the news worth publishing in head lines. He did not even publish it as a column. At least it was not published as a box item. When Nehru saw the news some where in  the last page  as a filler  he  had  blown  a  fuse.  He flew to  and reached Kotanraju’s office. He expressed his concern about the way his statement was relegated to the back pages while all other news papers published in the front page. Kotanraju was frank enough to tell him that it doesn’t make headlines as it was not that significant. Nehru flew off the handle and spoke in his usual manner,“What is this fantastic nonsense?” (it is his catch word). An exasperated Kotanraju asked Nehru to get out. Nehru left his room silently.

Kotanraju resigned following this incident. However Nehru asked Kotanraju to withdraw his resignation and continue. Such is the importance and individuality and independence of editors in those days. The decision of the editor used to be final. The editors and journalists used to maintain self respect.

Mr. Kotanraju changed 21 places but never compromised on self respect or professional ethics. He always used to have the resignation letter ready in his pocket. “I too used to have a resignation letter in my pocket all the time.  Telugu people were highly self respecting and particularly it was summum bonum (ultimate importance) of journalism. If you juxtapose today’s journalism with journalism of yore, you can make out the present day  standards of journalism. Today comments outshine news proving the Latin adage “suproeesio veri; suggestion falsi”

What is the efficiency and virtues of politicians in the past and present?

What is the effect of the shift of publications from  to ?
The opinion of Andhra journalists and leaders is not coming to light as majority of the newspapers and TV channels are from Telangana. and Rayalaseema but not from Andhra. We regularly watch KCR, KTR, Nagam Janardhan Reddy, Harish Rao, Eetela Rajander Kishan Reddy and Kodandaram, Madhu Yaskhi and KK and we occasionally watch a few leaders like Lagadapati from Andhra.


What is the secret of your health and  energy?
I believe Lord Hanuman. I am a teetotaler. I run for a few minutes in the early hours everyday. I think my self control also helps me in keeping fit. When there is any problem I think for a few minutes and leave it like that. I don’t contemplate and bother much about it.

Posted by poolabala at 8:38 PM