People may think that foreign language can be your passport to success but the HRD minister Smrithi Irani thinks differently. That is why she has taken a different decision. 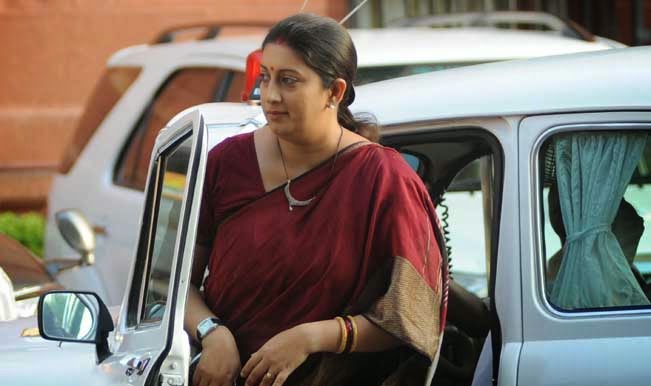 HRD minister, Smrithi Irani has relegated the German language in Kendriya Vidyalayas making Sanskrit the third language option. Her decision has not only been controversial but also been mootable.

The HRD minister on Friday strongly defended the decision. She says that the arrangement of German language was in violation of the three language formula, more over it is against education policy. According to the HRD minister German can be continued as an additional subject of hobby class

Critics say that the HRD ministry taking such a decision barely when the exams are three months away effects the students; about 68,000 students of class VI to VIII, likely to be affected by the decision. The minister said "an investigation" has already been launched into the signing of MoU in 2011 enabling German being taught as the third language which was a violation of national policy of education.  Ministry officials said that an MoU signed between KVS and Goethe Institute-Max Mueller Bhawan in 2011 was not even known to the Ministry. We must safeguard the constitutional rights," she told reporters while clarifying the ministry's stand on the issue.


The board of governors (BoG) of the Kendriya Vidyalaya Sangathan (KVS), headed by Smrithi Irani, had in its meeting on October 27 decided that German language as an option to Sanskrit will be discontinued. The Sanskrit Shikshak Sangh had earlier approached Delhi high court alleging that KVS had introduced German as a third language in place of Sanskrit against the education policy.

The episode of replacing German with Sanskrit leads to several interpretation and raises several questions. Is it the intention of the Government to promote Sanskrit or remove foreign languages? If it is for the promotion of Sanskrit?  is it limited to Kendriya vidyalas? Let us consider the State of Andhrapradesh where Sanskrit has been mocked squarely. At intermediate level many students choose Sanskrit as a second language only for scoring more marks. These students can take the Sanskrit exam in Hindi or Telugu or English. They don’t need to write Sanskrit in Sanskrit exam. Anyway they don’t use Sanskrit in real life for communication or for further studies.

Sanskrit the once Lingua franca in ancient India gradually withered out due to English influence. Today it is seen as a language listed as one of the 22 scheduled languages of India. If we want to restore the glow and glory of Sanskrit the best and the most effective way is make its use practical in media by replacing the superfluous and complex English words.  In china they discourage use of English words. The advertisements appear in only Chinese language. The advertisers cannot use a single English word. The next step is to think, what the students can do with Sanskrit. As such Sanskrit is a language of ceremonies and rituals. It is the professional language of priests who chant hymns and mantras in Sanskrit.  Even those priests now-a-days send their children to English medium schools. Where is Sanskrit practically used? Mattur is the only place in Shimoga district in Karnataka where Sanskrit is used for day-to-day communication. Even a barber can speak Sanskrit there. But what avail when we cannot make it to the educated people?

Can we canalize our education in Sanskrit is the million dollar question. Only with people communicating in a language the language may exist but can not flourish. For that matter, people are communicating in many regional languages such as Telugu, Kannada, Tamil but they don’t study in these languages. People want to study not their mother tongue. They want to study in world’s dominant language of science and technology, trade and commerce.  So our ultimate objective should be to make Sanskrit popular internationally.

After all the value of a language depends not only how many people speak. It also depends on how widely it is spoken (in how many countries), what are the opportunities for education and business, what is the research material accessible in that language.

Posted by poolabala at 9:54 AM