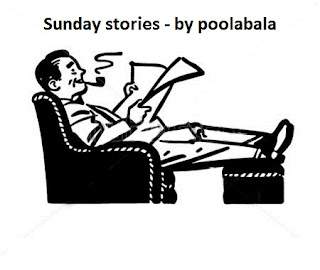 Pullarao, Jogarao, Ramarao are friends. They studied together, lived in the same neighborhood for long time in a small town until they got jobs in the city. They used to visit the small town occasionally during festivals or vacation.  their parents are also good friends. Pullarao always looked quite normal  when they met in their small town but Jogarao and Ramarao looked like metro sexual s with imported clothes shoes perfumes and glasses. "Pullarao you are simply a scarecrow before them" said the ward Councillor not only Ramarao and jogarao but also the entire neighborhood looked down upon Pullarao for his appearance. they even laughed at his traditional clothing ( panchakattu).

It was Dasara vacation they three friends were back in village. they enjoyed together nearly a week before they went back to the city. on a fine evening the three friends met in the paddy fields in the outskirts. "How soon the vacation is over! exclaimed Ramarao " Are you preparing the baggage?" said Jogarao.  pulla rao said , " I am not going back to the city" Ramarao laughed, " would you like to stayback in this small town and undertake cultivation?" Jogarao said, " people will also laugh at us if you do that" pullarao coolly said " I will never make you ashamed of me, don't worry. I got a job in singapore." that came like a shock to ramarao and jogarao.  when pullarao left Ramarao and jogarao had a brainstorming session in local bar.   They decided  to go to the USA but they hardly know that their academic performance can not fetch them a job. The consultant had arranged H1 B visa for them.

Exactly a year after Dasara ramarao and Jogarao stepped back in their home town but Pullarao did not come, there is no news from him either. everybody thought that Pullarao was doing badly. the two friends gave a big show of their American clothes, life style and culture. They bought Hundai city car. using  a motorcycle is not longer vogue and does not suit their status any more.  They even changed their names. Ramarao is no longer Ramarao he is RAMS, Jogarao is no longer jogarao but JAGS. they made such a big noise the entire neighborhood experienced a deafening silence after the ultra fashioned youths left for America.  The next year only pullarao came but he was sad the grimace on his face is the index of some mystery. something happened everybody thought. Nobody asked him everybody guessed that he has lost his job. only his father knows the truth to whom pullarao revealed after much persuasion. The truth is "Rams and Jags were arrested for a fraud in America" " don't tell anybody" said pullarao's father who is a farmer. Pullarao left for singapore. Later on he went to work in Germany for three years  and a year in Srilanka also but he has not publicized.

Eight years later when pullarao was back in his hometown fortunately he could meet his friends.  On a fine evening they met near the river.  " let us have drinks" said Rams. Jags is always ready but pullarao resisted.  "Poor Pullarao" they both said at the same time in a single voice. you have to change yourself pullarao, look at us, they said. " okay, please give me some time"  said pullaro. I will go you Amerika, do fraud go to jail lose job, come back and settle in Bangalore and lie to parents that I still work in america. I know everything Rams and Jags said pullarao. but what he doesn't know is that they are not  working but hunting a job in Bangalore. Rams and Jags were speechless and dazed.  Their parents are busy looking for girls for marriage. pullarao was not the centre of attraction. Rams and Jags have cars, US jobs  importantly the American look. ( they look like "dorababulu" always exclaims the washer woman. the educated people are no better their judgement is no better than hers) This is what the parents of the girls know. but what they don;t know is that they are on a big dowry hunt and later they want to go to some other country. Rams and Jags got married with huge dowry but pullarao remained bachlor.

Rams and Jags left for US  saying that they will take their wives soon.  Pullarao the scare crow is in his hometown with his money. He undertook developmental work in his village in a small way. He wants to start a small industry. He often walks on the street with traditional clothing( panchakatttu) the villagers still laugh at him. they don't know that they are laughing at their own tradition. they still judge people by looks like the washer woman but pullarao smile at them.
Posted by poolabala at 9:51 AM