This Diwali is an unforgettable day in my life. I could answer Japanese listening comprehension questions. I never thought I could do understand Japanese so clearly. I was under the impression that that i could not make out the audio of native Japanese speakers. Blindly I went on learning and practicing without keeping in mind the Japanese exams. Mr. Vaddikasulu said " I want to try the Japanese Language Proficiency Test which is called JLPT N5. I told him that I could not teach writing in original Japanese script although my grammar and speaking were good. I said that i could write in Romaji script, which is an alternative script. so the classes continued well but writing was limited to Romaji script. I started learning Japanese script I was successful two weeks ago. 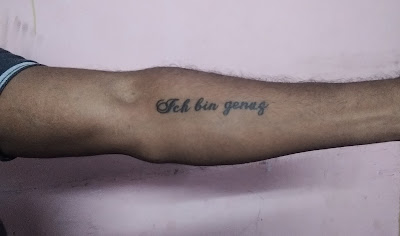 This credit goes to Mr. Vaddikasulu who is a student of matchless devotion. He has learnt German earlier and can speak fluently. Look at the tattoo on his hand. A German tattoo on a boy's hand?! which reads " Ich bin genug" ( I am enough). There is a moving story behind this tattoo of course. 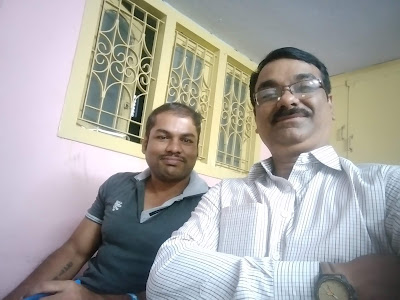 Nevertheless German tattoo underscores his love of German language. It also shows that learning is the sole agenda of his life in sharp contrast with men of modern generation who are after luxuries. He works in a bank but has abnegated all comforts for the sake of learning. He lives in a hostel, goes to places on foot. ( although he can buy a car and house). My Japanese language advanced in his company. Although I was able to speak Japanese, the Japanese script remained inaccessible to me until two weeks ago. Today I am able to listen to Japanese and answer the questions written in Japanese script. It is ideal to write a blog about vaddikasulu and by all means it is worth reading.