This is the moving story of Austria girls who came to India to serve HIV infected children. Magdalena Naussbaumer and Verena Gmeiner have remarkable qualities that brought them back to India.

The quality of compassion and the will to serve children. Yes you will be taken aback to hear the heart touching story of these girls. In fact, when I heard that three girls came from Austria and were moving to Proddutur I was dog tired I rushed to them in my sweat soaked T-shirt but I missed a girl. I could meet only two girls you see in the picture. I consider this a wonderful opportunity to tell you this human interest story. Magdalena and Verena work as teachers in Austria. I met them in Vijayawada at AIMS studio. I was surprised to know that they are spending  their hard earned money in India for HIV infected children. They came to India 3 years ago and served the children in an orphan home called Daddy Home and left for Austria. But they became home sick with the children in Daddy Home and came back to serve them. They are here since August 2011.

Verena was working as a German teacher when she came here in Jan 2012. She met Magdalena only after coming to India. Both loved the children equally well at the Daddy home orphanage. "Tears were running down to see the small children  in dire conditions suffering for love and care. "We can not afford to miss them" they said. Verena's voice quivered when she spoke. When Europeans can come and serve our children in India why can't we.

I am basically a die-hard fan of Languages

I have not missed the slightest opportunity of learning or practicing a language. I am constantly on fire to learn new languages. It is made me a polyglot ( a person who speaks many languages). These are the books I have written on foreign languages. Though I teach German language in Vijayawada I am also concerned about Social work. After meeting these girls I was inspired by their work. I started teaching English language in Vijayawada for the poor children without charging.I traveled far away places to teach French language. I took French Classes in a small village called Darsi near Addanki just out of love for the language. 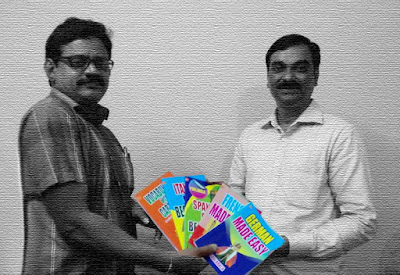