I was Invited to Sri Pottiriramulu Engineering college on 5th September for a lecture on " Careers with Foreign languages" It happened to be Teachers' day but it was a different kind of teacher's day that put me on cloud nine. 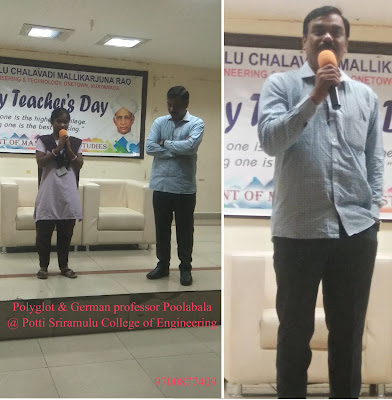 
When I entered the auditorium a few minutes before the commencement of my program on "foreign languages" to check the LCD projector and audio system in advance I found a few students playing on the dais. they were taking their selfies with Dr. Sarvepalli Radhakrishna on the background. I asked one of the students if they know anything about the personality (Radhakrishna) in the banner. To my astonishment they don;t know who he was. Most of the students don't know his name also.

Instead of starting the lecture with the advantages of foreign languages I started the program by offering prayer to Teachers. I invited a student to sing " GURU BRAHMA" When nobody came forward I was about to sing "GURU BRAHMA" Fortunately a girl came up to the dais and rendered it. Her rendition was so splendid mellifluous that it gave a blast in the beginning. 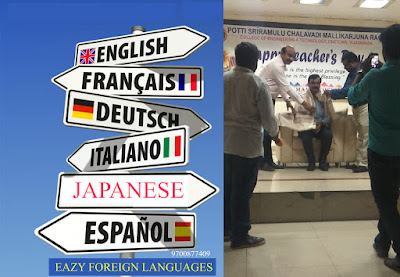 The students as well as professors who attended the lecture are delighted by the scope and advantages of German, French , Spanish, Italian and Japanese Languages. Many people remember the name poolabala  when they want to learn German or French in Vijayawada.    Eazy Foreign Languages in Vijayawada  is a non commercial organization.
Posted by poolabala at 8:11 AM