The French Revolution lasted from 1789 until 1799, and was partially carried forward by Napoleon during the expansion of the French Empire. The Revolution overthrew the monarchy and culminated in a dictatorship under Napoleon however France rapidly transformed into a democratic and secular society with freedom of religion, legalization of divorce, decriminalization of same-sex relationships, and civil rights for Jews and black people. The Republic was proclaimed in September 1792. Louis XVI was executed in January 1793. 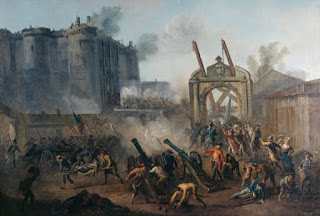 Following the Seven Year American Revolutionary War, the French government was deeply in debt and attempted to restore its financial status through unpopular taxation schemes but the years of bad harvests lead up to the Revolution. It was inflamed by the popular resentment of the privileges enjoyed by the clergy and the aristocracy.


1789 the first year of the Revolution saw members of the Third Estate taking control, the assault on the Bastille in July, and a women's march on Versailles that forced the royal court back to Paris are the important events of the French revolution.


Women in France had no political rights in pre-Revolutionary France; they were considered "passive" citizens; forced to rely on men to determine what was best for them. The women demanded equality with men and then moved on to a demand for the end of male domination. Their chief vehicle for agitation was pamphlets and women's clubs, but the clubs were abolished in 1793 and their leaders were arrested.


The Women's March to Versailles took place on 5 October 1789. it is also known as the October March. The crowd sieged the palace in a dramatic and violent confrontation. They successfully pressed their demands upon King Louis XVI. The march on Versailles proved to be a defining moment of that Revolution.


The revolution opened gates for flood of women. groups of women acted forcefully, making use of the volatile political climate. Women forced their way into the political sphere. Jean-Paul Marat was a radical journalist and politician during the French Revolution. Marat was assassinated by Charlotte Corday, while he was taking a medicinal bath. Corday was executed four days later, on 17 July 1793.

(beheading-was a popular punishment in Europe)
Posted by poolabala at 8:18 AM