The Reason for writing Anveshana 2020 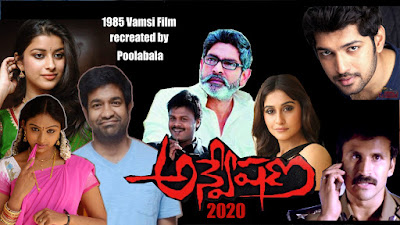 I like the 1985 film Anveshana. It is basically a Murder mystery.  A Murder Investigation and a  Research work go parallelly and simultaneously. The suspense thriller beyond doubt is a big entertainer. Any horror film needs a Romance track and a comedy track. unfortunately the comedy is poor  as it is limited to Satyanarayana's verbal abuse of his driver Rallapalli and the woman domestic help. The romance track is totally missing. However I am fascinated by the direction and the story. Therefore I have decided to rewrite the story scene by scene  but briefly.


Hot sizzling Regina Casandra in Bhanu Priya role with ample romantic scenes. Jagapatibabu plays the Role of Satyanarayana Ravi Prakash  plays the role of Sarat babu , Vennala Kishore appears in the role of Puliraju and Kausalya aunty in Vamp role. Madhurima acts in the role of Sumati, the first research assistant who was raped and killed in the forest.

Some highlights of  ANVESHANA 2020 in comparison with the old story.

Satyanara was a contractor while Jagapati  is a retired IAS officer with a keen eye for music.

Satyanara was voluble who often cracks down on his assistants with abusive words.

Jagapati is silent and dignified. His driver Saptagiri is unable to understand Jagapati's philosophy. He fails  to understand  Jagapati's dedication and commitment to the research work and often laments that only if he had such a position he would never think of anything else than enjoying with girls. ( This produces laughter)

His another assistant Satya is a B. Tech drop out. He is in love with the woman cook. His only ambition is to win her heart. He claims that he is a great engineer and agreed to work for Jagapati on his request.   He often boasts his adventures before his lady love (the cook)  just to impress her. Just then his boss asks him to go into forest. His legs tremble . Saptagiri  and Satya often deflats each other. Their conversations are amusing and funny. They have a heart touching story too.

This is the last working day of Jagapati IAS. Today the CM hosted the Farewell party at the secretariat. The hall at the Ground floor of secretariat was full. The Chief Secretary was present was seen preoccupied. He was accompanied by Additional Chief Secretaries, Principal Secretaries.  Ministers MLAs and several other officials were present. Jagapati looked quite relaxed. His grey hair and sharp eyes show his maturity and intelligence. There is occasional burst of laughter on his face during the CMs brief speech. After the CM finished the Chief Secretary began “joined the Indian Administrative Service (IAS) in 1983 and currently heading the Ministry of Environment, Forest and Climate Change. Prior to this, he was Secretary in-charge of Ministry of Health & Family Welfare he was Additional Secretary & Mission Director, National Health Mission.
He led one of the largest public health programmes globally. In more than 30 years of public service, Shri Jagapati has served as an administrator, policy-maker and public health strategist holding a wide range of assignments in the fields of Health, Education, Industry, Forest and Invironment. Shri Jagapati  is recognised for his significant contributions that improved public health landscape. He finished with the phrase “I wish him all the best” A few speakers spoke more briefly than the C.S but they were emotional. The farewell meeting ended and the party began.
Jagapati IAS became retired IAS when he walked out of the hall. He refused to accept government vehicle to drop him back. Department of public enterprises secretary offered his vehicle Jagapati smiled and said “ No thanks , I have my car waiting” He walked to his car.
Posted by poolabala at 1:43 PM