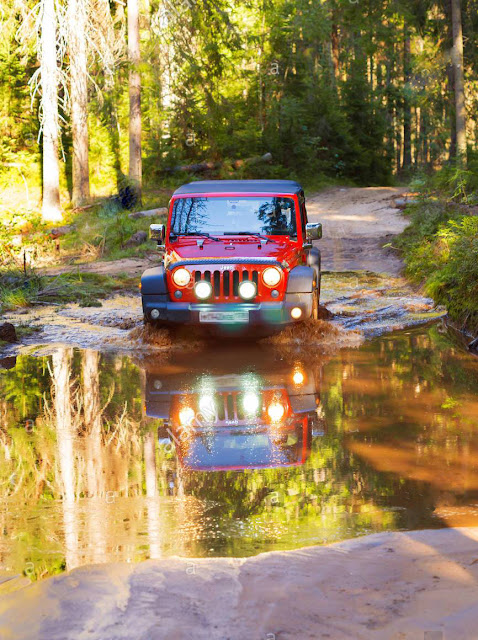 Regina leaned back in the back seat of the jeep. Giri and Satya sat in the front. Giri is behind the steering. The jeep is new and the engine is smooth. One could hardly the sound or feel the vibration. Near the station the road was wide and the trees were only side of the road. The trees were sparse and short.  The other side of the road there were small railway buildings.  As the jeep went ahead  tall trees on either side of the road came into sight. When the road took the first turn Regina had the panoramic view of the quaint landscape, such picturesque wilderness would certainly pull the cords of the heart of  the beholder only if he has one. Regina instantly pulled out the earphones and cried " Ooooooh! stop the car." Giri knew that she would cry because he brought many city dwellers to the forest. They were all overwhelmed by the beauty of the forest.  He had stopped the jeep before she cried with pleasure. Regina was nonplussed.  Saptagiri said " Madam you are confused  whether I stopped the car first or you had cried first. It is simple , they are concurrent."  I want to take a snap she said attempting to get down. Satya said " Madam, the forest is charming but many dangers are lurking charm of the forest."  The tranquility is deafening and the scenery is mind blowing." shouted Regina. "Sometimes it could be a siren's song." added Satya.


Satya you are cowing me! said Regina. She wanted to drive " Give me the steering" she said to Giri. Giri looked at Satya and laughed naughtily. Then started satya " Madam these are not city roads you don't have the GPS to guide you." She understood that they were not intimidating her but playing with her. She insisted on driving but soon desisted.  She was hell bent on seeing through the game. The jeep was running smoothly.  The tortuous dust road looked awesome in the  lawless rocky terrain. The jeep was zooming past the graval road leading to hills. Hills.. hills and hills everywhere. Suddenly a bison was seen running towards the jeep. Giri pressed the accelerator and the jeep  sped up faster and faster until it escaped the bison. The bison chased the jeep for a while and stopped. Satya said " Look ! my heart is still throbbing. We are lucky , we averted a big danger. said Giri. Regina was silent and reticent. A while later the tree cover became thicker. The ubiquitous trees and rocks and the bewitching silence reigns Regina's fervid fascination.


Now it is calm. The cool breeze became cooler. Regina saw a man with a wild goat and a woman with a faggot walking barefooted on the dust road. A few moments later she had seen a child carrying sacs and utensils on the head. They got off the dust road and took the labyrinthine paths in the grass land that. " They are the tribals. They live on the hills." said Satya. Giri turned the jeep to a side road that is narrower then the graval road.  Don't worry madam  we can save two kilometers it is short cut.   Satya said "  madam there is no danger  Satya repeated.  What do you mean? Regina raised her voice. Giri turned his head back and said " some people heard and some people have seen tiger in this forest. Satya said" Madam are you afraid of tiger?"  Regina would have raise with anger had the faint sunlight in the back drop of the hills not placated her. It was soothing.

Suddenly she heard a tiger growl. It was Satya who growled like a tiger, Giri knows it. The jeep was running through the vista of tall trees. Suddenly the jeep stopped. Regina asked  "Giri why did you stop the jeep?"  Giri said " Madam I did not stop  the jeep. Rather the jeep was stopped. The back wheels of the jeep are stuck in the slush. She knew that the jeep had fore wheel drive. She understood their game plan. Ok let us get down and push. she said and jumped off the jeep. They too got off the jeep. A winding rivulet was flowing through the forest. She stood in the water and observed that the back wheels were half sunk into the mud. The ground around was swampy there. The splendid tall trees around the jeep and the green hills behind them were pleasing the senses. what should have been a tragedy became a spectacular show.

It was like watching National Geographic channel on muted giant LED television. The forest is charming she said. Suddenly Satya growled like a tiger.  She ran a little distance and threw her walk man player into the bushes. It was playing in the bushes. Giri said  amusingly" I hardly care tigers and lions" She pointed to the bushes and said " Look heroes the tiger's growl is heard in the bushes, let us go and see" she said.  " Yes There must be a tiger behind the bushes" said Satya.  we need not worry as long as Giri is here" said Regina. " Let us go and see" She insisted.  What go and see?!! Satya fainted and Giri was shit scared. He ran to the jeep but Regina had dragged him out by hand. she got in and started the fore wheel drive and got the jeep out of the slush. The two men came running and begging for place in the jeep. She then dragged  them to the bushes with much difficulty. She focused her phone torch into the bushed. The cassette was rolling slowly in the Walkman tape recorder. The tiger growl was only a playback. She pickup the gadget and stopped it. Their faces looked as pale as ghost.  "Satya said  you were a namby-pamby girl  I said you are swashbuckler.Giri divulged the challenge between them and both started apologizing her profusely following her until jeep. Needless to say that Regina is behind the ring.