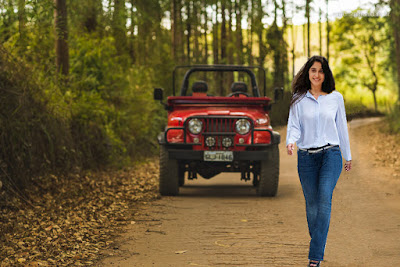 The three boarded the jeep. Giri had hardly pushed the gear road into the neutral when the Jeep started gliding down the hillock. The engine was off. Silence reigns the forest. Regina's  zeal  could not wait to see her dream. She flew off her heart like a bird and darted down the village. When the slope ended,  the plain road began , when Giri saw her  out of her body he deliberately engaged the third gear and left the clutch forcefully. The engine started with a  jolt. . Regina's spirit came back to her body. It began to sound like wasp.  She said  " Stop the jeep" Giri pulled the jeep aside and stopped the jeep" Giri knew that she wanted to do move around in the beautiful serene milieu.  He said  "Ok , go ahead we have no hurry today. We have plenty of time. The village is at a stone's throw. We have to kill the time until lunch time and get back to the Bungalow for lunch" "Killing the time? Yes, we can, only if the Tiger won't kill us" Said Satya. "Shut up Satya " Regina shouted. As her words began to echo she jgot off the jeep and walked ahead gleefully. She looked like a caged bird or a fawn set free. Giri and Satya moved back. Giri lighted the cigarette and offered one to Satya. "Giri, did you observe what she said ?" "What?" Said Giri. "She said shut up., what do you think?" Giri said "That means our friendship developed" Said Giri. Satya pulled a long face.

Like a machine among machines she dwelt in the concrete jungle, very few to befriend and none to love  now came the rare time to chase butterflies with a jocund spirit hang to the branches of the trees, pick up nuts under trees, walk barefooted on the lush grasslands, hide in the bowers,  shout Hooo haaa at the hills , merrily rejoice the resound. Giri and Satya stopped smoking and were watching her with bated breath when she started singing LKG rhymes . She was looking at the passing clouds. It looked like she borrowed the spirit from the white clouds. Giri felt it is quite natural to her . He said " This city girl has been longing to see the forest ever since she came." Satya said " Do you think she is a city girl?" I don't think so. She must be a job hunter, perhaps she has finished her graduation, I am not very sure. Who will come for such work?" Satya snapped. Ok may be you are right. Let us finish the fags, we are wasting them. Said Giri.A moment later they looked up Regina was not seen.

Ah..damn it ... she must have lost her way in the forest. It is our mistake we let her free. Mr. Jagapati was always warning us keep the weather eye open and watch her carefully. Satya and Giri decided to search in two directions. They left the jeep in the same place and started walking ahead. After a two hundred meters the road diverged in two ways. One road leads to the village the other road leads to the Cheeta water spot. The previous night the jeep came along that way. if one goes in that direction there are several foot paths and small roads that lead to deep forest. If she took one of the paths it is almost impossible to get back. Satya took the road towards the village and Giri took the road that leads to the Cheeta water spot. Giri's heart was beating fast, a kind of palpitation he never had. Just then he saw two bears. His heart skipped a beat. Oh the bears are moving around. What if they saw Regina , they would hurt her. Thankfully the bears did not see him nor came in his direction. But he could not relax. He started running. He could hear his footsteps. He started running faster and faster and he began to sweat. He saw a faint voice. He stopped there suddenly and looked around. He saw a shape on the hill yonder. It must be Regina. He ran near the hill and saw Regina on the top of the hill. " Madam , wait I am coming" He shouted. Regina shouted back. "Giri stay back I am climbing down." After climbing down she said " I lost the sight of the jeep and in spite of walking and walking I could not reach the jeep. Then I realized that I was not walking towards the jeep.  I changed the direction but God! there were several paths." " Why did you climb the hill?" said Giri. " because I had two options left one is to call you  but there is no network.  the other option I have is to locate the jeep. It is possible two get the sight of the jeep only from a height. She finished. They walked back to the jeep. " Madam there is no question of cell phone network here. Luckly your idea saved you." Said Giri. They boarded the jeep and rode into the village where Satya was waiting for them at the village centre. It was the Village blacksmith's place. A few bullock cart wheels were waiting for iron rimming. Giri told Satya what happened to Regina. They parked the jeep there and started walking on foot. "Satya, where are we going ?" First I take you to the head Man's house next we can visit .. They were walking and talking. Just then a villager on the bullock cart was staring at Regina. He had angst ( fear) in his eyes. Giri approached the old man and greeted him. The old man was not concerned about the greeting, he said to Regina, " Have you come to the Bungalow? you too came for the birds?" Regina did not fully understand what it meant but she was surprised. She could only reply in affirmative. 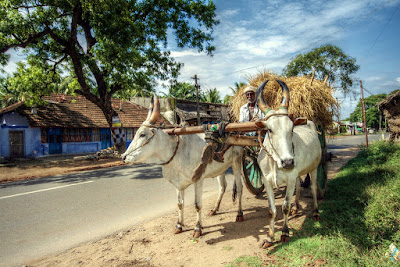 They were walking , next they stopped at a tea stall. All the customers as well as  the tea stall owner Anjibabu looked aghast when they learned that Regina came for the birds. Regina  became more curious than surprised. She pressed Giri, " what is the matter? What is the meaning of the strange looks?" she asked. I don't know said Giri.   "I too " Satya immediately joined Giri. Look there! Here is the Head man's house. Said Giri. Regina turned her head to a beautiful rural jabled house with iron fence and large iron entrance gates. There is a bougainvillea canopying the entrance. The  spacious front yard lending a bungalow look to the ancient house. " It looks like a Portuguese  or British design. Regina said to herself. They flung open the gates and entered the house. The Head man and his wife came out to receive their guest. The head man was 40 year old man, dark complexioned with simpleton looks. He has the face of a stupid. " My name is Pattabhi and she is my wife Nemali.

Regina looked at Nemali. She is  30 year old. she has bright rotund face with large liquid eyes. She has firm curvaceous body with sizzling hot looks, Carnal desires are playing hide and seek in her eyes. Her voluptuous physical features  are downplayed by her sensual  stance. Regina thought she was an uneducated bimbo.  The headman is very vainglorious who often boasted his linage showing the portraits of his ancestors on the wall. regardless of the interest of the listeners. Breakfast was forced on the guest. Later hot coffee was served. Regina looked at the portraits on the wall, Giri and Satya were scared of her curious looks. They guessed the inevitable disaster. Hardly had she opened her mouth to inquire about the portraits both men ducked off from the chairs and slipped off.   Like a tiger that  pounces on its hapless prey the head man pounced on his family biography.  He was immersed in narrating the adventures of his forefathers unmindful of the predicament it causes to the guest. The head man's wife  was giggling secretly.  She knew that Regina was paying courteous attention to the head man.  When she saw local farmers at the gate she shouted " Look somebody is coming" At the fall of hat she took Regina's hand and dragged her into kitchen. They looked like agile Bofors gun that moves quickly after firing at the target. In the kitchen they dumped themselves on small stools. "One more coffee?" she asked Regina.  Regina said Sorry when Nemali gave her the cup , why asked Nemali. I thought you were a bimbo but you are sensitive and mercurial. Nemali laughed.  Nemali took Regina into the backyard. They went into the back yard.  "I like the back yard." She said. Nemali laughed.  "It seems like she has a special way of laughing." Regina thought. 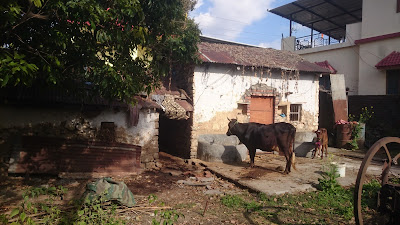 " I like the house, the bougainvillea and I like you too. Said Regina. " Oh! thanks. but the house is very old.  what  what do you like in the house? " I like the boundary wall" said Regina. Nemali laughed again. "Boundary wall is a British import. In India we never had boundary walls. In ancient India all door used to open on the street. in cities and middle towns boundary walls render useful land useless and make the fire fighting difficult. ( when houses are close the fire fighters can not move freely) The British could not popularize the boundary wall even in America which was a past British colony. Boundary walls brings social distancing  than standing as the security against theft." What a lecture Nemali !!! She took leave of the couple and walked out of the Iron gates where the men were waiting with jeep. The jeep was moving.  "How are the made for each other couple? " said Giri. " They are poles apart. she is bright beautiful and Intelligent and he is...."  Regina stopped. " why did you stop ?" said Satya. It is evident on his face. In few minutes the jeep  reached the Bungalow.

Posted by poolabala at 3:31 PM