Interview with a Passionate Vocalist 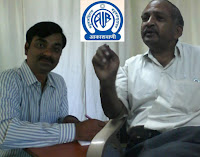 THE RAINBOW  PERSONALITY
Agile mind, enthusiastic heart, vivacious voice, gifted with virtuosic music skills and prodigious social skills, Mangalagiri Aditya Prasad a multifaceted personality is also a transcendentally articulate communicator who achieved balance in excellence.
Mr. Aditya Prasad is a violinist who gave numerous solo performances all over the country. But it is not enough to call him a violinist. He is a graded music composer for over 30 years.  Music is his forte. Besides being a music composer he is into vocal music. He won Second prize in Karnatac light music in radio music competitions in 1976. His music composition “Nishiddaravali” that underscored the pathetic story of a dancer transformed to orchestra without lyrical and vocal support won Akashavani 1994 annual award.  Mr. Aditya Prasad is a post graduate in Telugu language and literature besides two Diplomas in Music one in Karnatac Violin and the other in Karnatac Vocal. Some people are recognized by University degrees while some others are recognized by their inner quality and performance. Mr.Aditya Prasad  belongs to the latter who is qualified by his rich experience. Bass, Tenor , Alto and Soprano the four tonal qualities of music blended into him and with the 4 tier system representing  four tonal qualities of music he organized innumerable music concerts. Years of experience is often expressed to impress if passage of time adds nothing to the art.  But men of spirit mark each year passed with innovation, a breakthrough. Mr.Aditya Prasad has evolved a special style in karnatak classical Violin solo.

Born in Repalle in 1975, in district, A.P Mr.Aditya Prasad entered Akashavani as an announcer, worked at Vishakapatnam, Kadapa, and in different positions. He is now working in as Station Director. Though he is familiar as a radio personality he is popular as radio activist who promoted radio, and designed, developed promoted and glorified various radio programs. In one word he revolutionized the radio programs and connected them to masses, especially farmers. He exhorted the farmers to tie a radio set to bullock cart. Perhaps this unusual dedication came to him from the art in his heart. Mr. Aditya Prasad is quick spirit who can create a new dimension to any given task with sheer pleasure and keen commitment. Like a rainbow that shows multi colors he displayed mutli-talents. London Commonwealth Broadcasting Association bestowed him International RolsRoys Award for the excellence in broadcasting plays(drama) for five long years. For 8 years between oct 2nd and 12th  he carried out special campaign for Radio. His efforts to take the radio to masses won him laurels from one and all. He won several awards for the services he rendered in the field of music. Sangeetha Jnaneswara, Lalitha sangeetha sagara, Ghantasala gana pravaktha are some of the many titles given to him but al of the titles apt to Mr. Aditya Prasad. He deserves all the titles. None of them is unjustified or superficial. He not only loves Ghantasala’s songs but also adores them. He played Ghantasala’s songs by creating many special programs thus he touched the hearts of people. It is a program that endeared him to masses and classes alike. His skills outshine his programs and some times his the other way round. It is hard to conclude which of the skills he is best at. He is a blend and balance of excellence. As a special guest  and as a chief guest he participated in 300 programs. He introduced 400 different artists of proficiency poets of profundity, and researchers of excellence. Jandhyala Charitable Trust felicitated him with the title Radio Prachara maharadhi” for the versatile services he rendered to Akashavani. Today the self made man thrives with the artistic image strives for excellence in the field of music. The interview with our associate editor Mr.Venkat Poolabala reveals his penchant and quest for music besides many interesting facts about music.

He said that the two important prerequisites of music are aesthetic base and Scholastic base. They are complimentary to the success of both music and artist.  He outlined the work of music maestros Tyagaraju, Balamurali and Mandilin Srinivas. He applauded the work done by Yella venkateswarao and described it as the aesthetic attraction. When asked about the influence of cinema music on music he said it is a question of quality but variety. He said,” lyrics make sense only when accompanied by good music” He also said that the English instruments are dominating Indian instruments like kanjeera and violin. He called Violin as mother of all the musical instruments. When asked what is the influence of remix songs on music he said “as for as music is concerned there is harm” He said that Tamil Nadu is far ahead of Andhra Pradesh in honoring Traditional music.The people of Tamil Nadu have special appeal for traditional music. Traditional music binds youth to our culture and traditions. When asked why today’s youth don’t wish to learn traditional music he said, Money is a big attraction, they have to spend at least 10 years to reach certain stage in music, dividends are not guaranteed but if they spend the same 10 years on software they can earn big money” He said that TTD five year scheme a program that offers a course in music. Upon completing the candidates are absorbed into high paid jobs with one lakh and above salaries. "Music practice develops inner focus" he said and described Dr.Raghavan as the spiritual heritage of Tyagaraja. With his experiences, experiments  and innovations lets hope that this Ganasaraswathi stands as an inspiration for young aspirants as well as the career oriented.
Posted by poolabala at 12:13 PM