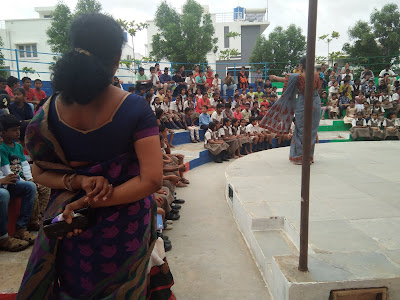 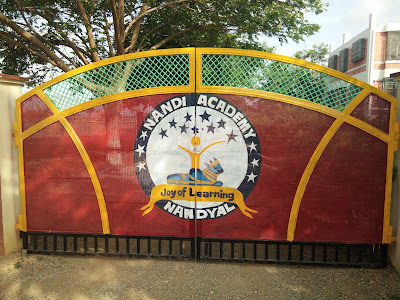 The workshop is a  feast with rare menu. If you look at the dishes offered in the menu you will gladly accept that it is the rarest feast to the children. It is also a feast to my soul. I thank the magical hand behind the ' MAGIC OF LANGUAGES"  work shop Smt. Padmakala for giving me this opportunity and rising curtain to this esoteric  extravaganza.
The children are fortunate to have such a Principal who is making the school futuristic among rustic corporate schools which can not even imagine such a work-shop. That is why children in corporate schools don't have proper English leave alone foreign language. 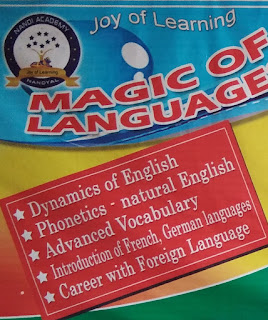 That is why I am extremely delighted to enjoy myslef  these three days. So I declared 3 days holidays on 11th 12th and 13th of June to  "EAZY FOREIGN LANGUAGES" Vijayawada and went on pursuing my hobby , dream and profession " foreign languages"


The third day,
13th June is the master blaster - workshop on Foreign languages. The dawn broke with great alacrity and the jubilation. The assembly starts at 8.00 am. but I started my work at 7.00 am. I met students in the hostel,  in the dining hall and under trees in the sprawling 40 acre campus. I training the students on French, German and Japanese conversations. Italian and Spanish greetings.

I began with Japanese speech " KYO WA SUBARASI DESU - meaning today is a beautiful day"  I spoke for two minutes in japanese and sang in japanese the "sukaki song" They are absorbed into Japanese then started the French and German Musical presentation. I  played with both languages singing the basics of the languages with various musical tunes. Fortunately there was a piano accompaniment. The piano blended with my voice and made my presentation splendid.I quickly finished my Italian and Spanish speeches as the children were eager.

After the assembly the Work shop on French and German started. the work shop continued until 3.00 pm. Richards was with me all the time until three. After lunch I went to the Guest house rested for a while and returned to the school at 4.30. The teachers were waiting for a Special class on English phonetics. The class was in Audio Visual room. I used projector and present phonetics and dictionary pronunciation. The teachers found it interesting. Richards was also present in the A.V room. Richards  shadowed me like true disciple , he has both respect for the Guru and quest for the knowledge. The principal Smt. Padmakala called both of us Ramakrishna and Vivekananda. Mr. Richards went home but came back at 8.30 to drop me at the bus stand. I got into the 10.00 pm bus. Richards waited until the bus moved and waved at me and vanished into the night's darkness.

Posted by poolabala at 8:56 AM