A stunning perseverance  for French learning. 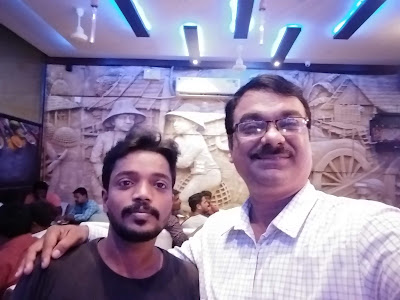 I visited Nandi Academy in Nandyal on the invitation of its Principal Smt. Padmakala for a three day workshop on French and other Foreign languages to the students.
I stayed in Nandyal for three days 11th, 12th and 13th. I stayed there in a guest house provided by the school.
This blog post is dedicated to Richards and to his ultimate French learning spirit.

Mr. Richards met me on the first day after reading in the newspaper about the seminar. He wanted to learn French. He said it was a his interest.

The first day
when Richards met me I was speaking with the Principal.  Richards was waiting outside the Principal's room.  I finished speaking with the Principal. She asked me to visit the school assembly. She asked Richards to wait. I moved on with her.  After the assembly I went to visit the school campus. It was a big school so it took long time. I thought Richards would go away. who will wait so long? but Richards waited for 3 hours to talk to me. Then I understood his quality. I took him to my guest house. There our journey of friendship began.


The second day too Richards paid at most attention and to learning and great respect for me. It is the admiration he has for French. He was in a mood to pay the fees but I was not in a mood to take fees.  Richards belongs to a different class of individuals who admire learning. Unlike many students who simply can not connect to learning respect teaching he devoted himself to the teacher.

That night he took me to his father and and on my request introduced me to few other friends who are sophisticated in real sense. They are excellent in singing , writing or learning. they are rich in art. A young boy sang in Spanish. Richards father writes lyrics. They are sung by eminent singer. I forgot myself while listening to them. He is a social poet and his poesy is ecstasy. His brother is a virtuoso guitarist. He played the guitar for a while but the rhythms and tunes are still fresh in my mind.  we had dinner out side in a hotel. I reached home at 11.00 pm. 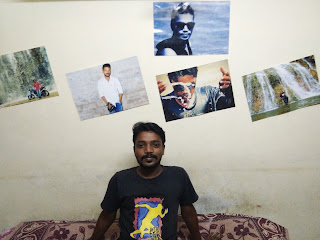 The third day After the assembly the Work shop on French and German started. The work shop continued until 3.00 pm. Richards was with me all the time until three. After lunch I went to the Guest house rested for a while and returned to the school at 4.30. The teachers were waiting for a Special class on English phonetics. The class was in Audio Visual room. I used projector and present phonetics and dictionary pronunciation. The teachers found it interesting. Richards was also present in the A.V room. Richards  shadowed me like true disciple , he has both respect for the Guru and quest for the knowledge. The principal Smt. Padmakala called both of us Ramakrishna and Vivekananda. Mr. Richards went home but came back at 8.30 to drop me at the bus stand. I got into the 10.00 pm bus. Richards waited until the bus moved and waved at me and vanished into the night's darkness. My hear cried " Oh! Richards"  What a lady! What a Man!


RICHARDS STEAD FAST ADHERENCE TO LEARNING FRENCH IS AMAZING. HE NEVER LEFT MY COMPANY EVEN FOR A MOMENT DURING MY THREE DAY STAY IN NANDI ACADEMY. IT HAS WON A TITLE FOR BOTH OF US.

Posted by poolabala at 8:59 AM