The first French novel from Andrapradesh was released in Vijayawada in Jan 2017. The Book launch was widely reported in all English and Telugu newspapers. 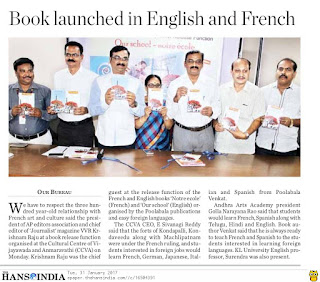 "Our School" and "Notre école" are English and French novels. French and English novels were released at the Amaravathi cultural center Vijayawada in Jan 2017.

Bhavitha (8th class student from Vijayawada ) had been learning French for two weeks when she attended the Bilingual novel release function at the Culture Center in Moghalrajpuram .

The CEO of the culture center Dr. Nagireddy has keen interest in French language. He has learnt French in Hyderabad. and thrilled to know that French was being taught in Vijayawada. He said, "In those days French in Vijayawada was unthinkable." He has great love and understanding of French language. He has enlightened the audience about learning French. He wondered if the French learners in Vijayawada could speak in French.  I offered mike to my french student who had been learning French for two weeks to speak in French.  She has taken the gauntlet in the presence of educational consultants and the other elite . She sang and delighted the audience. It was simply a challenging performance. 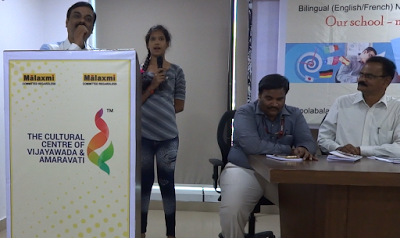 Posted by poolabala at 7:59 AM