French in Vijayawada - Jaunt with francophone

A car trip to practise French. 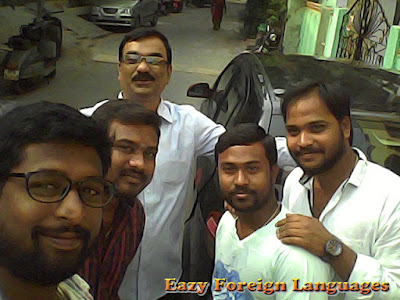 On 30th December 2016 we a small group of French learners in vijayawada went on a Jaunt(a pleasure trip). Keeping up with the tradition of Eazy Foreign languages - learning French out side the classroom.  We started our trip with a goal to enjoy French speaking in a private sphere.

Usually such trips encourage camaraderie and quickens language learning. I had more Ausflüge ( German word for trips) than des excursions. ( a French word for trips)  Yes.. true. I had many outings with German students than with the French students. The reason is French students are very very very busy. For each trip to happen I start my plan a week to a month in advance.  My German blog www.germanplus.blogspot.com shows more trips and outings with German students.  Language learning must be dragged out of the classroom. Whether it is French  or German this is the philosophy of Eazy Foreign Languages. 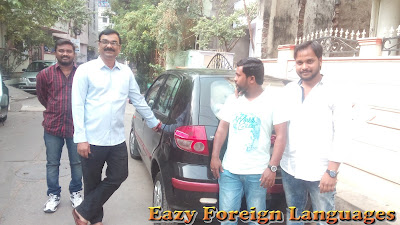 The journey started at 10.00 A.M on 30th December as planned. Mr.Rafi, Mr. Kesav, Mr. Yogesh and Mr. Venkatesh and I started from palaparthi street. Usually I use my car for all educational trips but this time Rafi's newly bought car Getz gave us her smoothest ride like her owner who gave us warmest fun.
A sweet memory

Rafi's company is always a joy. He makes the conversations light and fun. Yogesh and Rafi always play the match like two batsmen in cricket. Fun needs Ideas and Energy too. They have both in abundance. It is a healthy way of learning too. Yogesh took us to his house beside hills in Mangalagiri. I had coffee and conversation with his parents. His mother gave me coffee and volunteered herself into conversation. we came out  from Yogesh's home and Rafi was driving. Fresh fun began. we enjoyed everything.

Then the conversation and car travel both took a turn. The conversation was on French short film and actors and actresses for the film and other rough jokes and satires and retaliations in the onward journey became personal. When you find equals anything sounds good, dancing or drinking. we decided to visit "impulse" the most expensive pub in the city near D.V Manor Hotel. 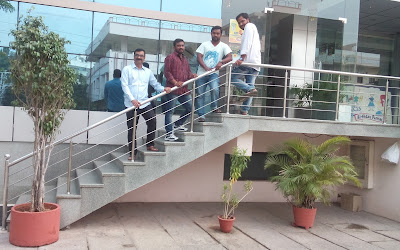 We traveled with more enthusiasm with vivacity and finally reached our destination. we got in to the fourth floor by elevator and enjoyed the music, discussed love marriages and careers. The marvelous conversations led to cheers. We are going to make a film in French. that is for sure. French zindabad! Friendship zindabad!!

A short duration course is Free for online learners of French 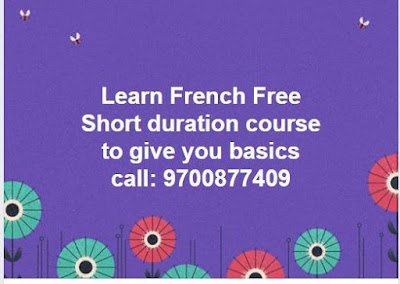 Posted by poolabala at 5:36 AM