Lovers at Cubbon Park - turns the Tryst into Arcadia 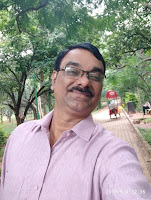 my recent trip bounced from its original path of Chandigarh, drifted to Delhi and finally materialized to Bangalore. I went to the Garden city to  strike a deal  for a new career and to consolidate my mind, soul and spirit  by incorporating the knowledge gained from education, comparing it with the truths discovered by experience and  finally to create new guiding principles necessary to stand against the ravaging circumstances for contemporary society to live in.

The trip is an investigation through extreme suffering and deprivation to transfuse a new spiritual thinking to my mind and transmute my lifestyle. It is an effort to ascend, to transcend and to have a firm foothold in the climbing.

On the way to other worldly journey,  I have not eaten deliberately -  hunger pangs brandished the whip of fire in the belly, walked at least 20 kilometers each day( except for the heck of it hired Bounce bike and traveled in Metro), fatigue clutched my legs , lived in self abasing and self abrasive style - forget to be my regular self .  In course of the entire self imposed ordeal  nothing has  betrayed me as  Cubbon Park. The scenes at Cubbon park have not touched my soul... at least they could not disturb my mind as they did Brahmrishi Saubhari.  They only gauged my mental resilience and introduced to me the anomalous side of me.

Brahmrishi Saubhari who had the eight mystic powers (siddhis) that are extremely difficult to attain through most austere practice ( Tapas). He actually  achieved  them  by dint of  Jal Samadhi.   During his jal samadhi  he saw a big fish having sexual pleasure with its partner. The scene has kindled desire in Maharshi with yogic perfection. He wanted to enjoy the same so he broke his sadhana and decided to marry. Hence changed his path. 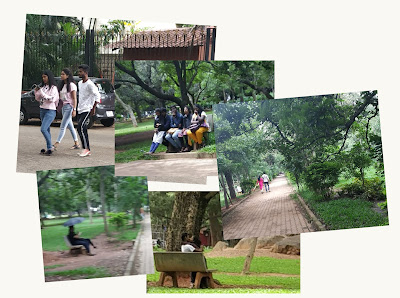 THE CUBBON PARK IS THE ACID TEST.
.

Had I been young or feeble at mind I would have had enthusiastic glimpses of the love birds in Cubbon Park. when I saw these scenes it is not the desire that struck my mind  but thought. The thought of Human freedom. The stare free environment brought to mind perfect place for human freedom where no one pokes his nose into others affairs, no one stares.... no one cares what you do. 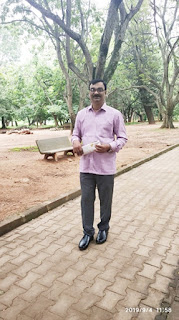 Like the army carries out the dummy crash test with mannequin for military vehicle blast I carried out my transcendental lifestyle adaptation test  using a dummy called Poolabala. Believe me it is not me.  I have already written the first page of A Beginner's Guide to Transcendental Style. The achievement is less important than the magnitude of disillusionment and the loveliest thing is the disillusionment came easily. The excruciating pain diluted in the yearning for transcendental feeling  for aught I know the irrational passion into an emotional neutral existence

I became my own protégé to assay the strength of my spiritual ruminations on Poolabala as if I were not him and behaved like a complete visitor to the planet displaying detachment I tried to perceive the unknown existence through known existence.

Ah! the body can not take you to the place where the mind frequently carries your spirit and the spirit can not comprehend unless the mind is illuminated ( mind is the part of the spirit) but the fact that we can push ourselves ( the body) through earthly pain. only when you discover that pain is the perfect vehicle.