A few weeks later it is September. It is Sunday but it isn’t rainy. It is warm and breezy. Manu stood on the terrace looking at the sun. She enjoyed watching the sunrise. The she was looking at the road and traffic.  The bottle green saree she is wearing contrasts with her golden complexion and arrests the beholder’s looks. Her long flowing black hair falling on her inverted rotund cup shaped hips is bewitching the senses.  She looked like hamdrayad( wood nymph) fallen from they sky. 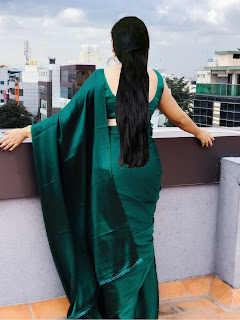 Kyra gently kissed on her broad back opening blouse and hugged her from behind. Manu twisted like fish in the net in Kyra’s clutches. “Kyra leave me, ey kya bartameejee hein?” She shouted.  “Is bartameejee kaa naam pyaar hein. Said kyra and set Manu free. Manu turned back and saw Kyra inpeech saree and sky blue blouse. She was more sexy than breezy. He breast protruding from the blouse and her nipples are strikingly visible from the transparent saree that failed to cover.

Manu picked up a stick from the terrace. “Manu you are so beautiful” shouting these words Kyra started running. Manu chased her with the stick in her hand. They made several rounds. They ran like fawns on the terrace until Kyra was tired and ran out of breath. Kyra stopped at a corner panting and gasping for breath. Manu reached her with the slender stick in her hand. Kyra stretched her hand. She offered her hand to Manu to beat. Manu threw away the stick and hugged Kyra.

Manu: Kyra I see a drastic change in you. You are getting up early, no night outings, wearing sarees, what is all this?  I was tired of saying all these things. I was disappointed. I thought you would never change but..

Kyra “Manu I love you like my own sister. I have respect for you but I could not change. I did not understand the value of these things as long as you were telling me. Sorry for disappointing you.

Manu: That’s alright.  How did you change? What has changed you?

Before Kyra began to answer Manu saw a car coming into the apartment campound. The lady sitting in the car looked at Manalini and waved her hand. Manu also looked at her and waved her hand. She said to Kyra “ She is Devaki, my friend”. They both got down and went into their flat. They were waiting for Devaki in the livingroom. She is a hardworking pious lady. Her husband desolated her nearly a decade ago. Her story is heart breaking. Said Manu to Kyra. “I can understand.” Said Kyra.    After a few minutes Devaki appeared at the door in red saree and black blouse As usual she looked like mirchi.

Manalini invited her in and hugged her after she came in.  They seated her on the sofa. “I have brought something for you.” Said Devaki.  Kyra shot into the kitchen. Manu was excited about visiting temples with her new friend Devaki. Devaki opened her black hangbag but she was waiting for Kyra.

Kyra entered the hall with three cups of tea and biscuits in a tray. Manu was dumb stricken. What happened to this dirty girl?!! Said Manalini.  “dekho behin, mein gharwali banana chaahataa hum. Gharkaa kaam kar rahee hum. (I want to be a house wife, so I am doing household work.) What is wrong? Said Kyra. Manalini went and hugged Kyra. Her eyes are filled with tear of happiness. Devaki also wiped tears off her eyes.

A moment later the three were sipping tea sitting on the sofa. Manu said “Now I understood that marriage has changed you.”   Kyra was bemused and said “arey dhed dhimaak saadhee kab huva?  I fell in love and I decided to marry” “wonderful, good news , tell me who is that man? Said Manu. “ I can not tell you now, I haven’t yet told that man but trust me he loves me so much and he too wants to marry me.

Then why don’t you propose?  Sadi Manu.  That is why I said you are halfwits. I want him to propose. “Sahee baat hein behan”said Devaki. Kyra said “Manu if you agree I will see a match for you. No sensible man man can afford to miss you. We both marry at the same time. “Bye the bye you look for a Devaki behin.”  Said Manu. Said Manu to Kyra and asked Devaki not to mind.  Devaki laughed and said sukr hein  aap saadhee kee baath kar rakeeho but brides are approaching me directly. The brides are coming on their own, once in a fortnight. My garments contractor proposes to me, my house owner proposes to me and the departmental store owner also proposes to me.

Kyra “ Then why don’t you marry one of them ?” said Kyra. Devaki laughed and said “They want to keep me not marry me” Her voice became dull and her face became miserable.

To hell with those mean spirited scoundrels, There is no dearth for good people on the earth. I will search for a suitable groom. We three should marry on the same day.

Hai Hai I have a grown up son How can I marry? You are young girls you marry I don’t want. Look, Manu A good boy is there, his name is Kanhaya.. while Devaki was telling Manu said, “I am sorry.” Kyra was surprised  “ what you don’t want to marry, you encouraged me to marry all these years.” She was observing Manu’s facial feelings. Manu hesitated for a few seconds. She felt very shy to say that she is in love.  She bent her head and started pressing her toes on the floor. Kyra and Devaki were amused to see that. Upon soliciting and cajoling finally Manu opened her lips and said “I too fell in love. But I can not tell you his name, I must tell him first, then to elders. Then I will tell you. Manu said mincing her words.

Devaki sighed deeply and said “ I thought of asking you for my boy. But any way I have another good news for you.” She pulled out the newpaper from her bag and spread it on the table in front of them. There was a news report covering youth for seva programs in Noida. After the report a special article was published on Manalini. Kyra took the paper into hand and read “The woman with a heart.”  Manalini was described as a woman with a heart. Kyra read “10 lacs Huge donation by Manalini IBM employee to seva Kendra to buy medical equipment. “ Kyra was dumbstricken. I want such a good girl as my daughter in law.  Thought Devaki earnestly. They reached the cellar where the taxi was waiting. They got into the car and the car moved. Manu said to Devaki “Now starts our pilgrimage.” What do you mean by pilgrimage? Said Devaki. “Visiting temples is pilgrimage” said Manu.

When the car disappeared Kyra ran into the bedroom for her phone. She decided to tell Mayur what is in her mind. She checked the messages. Mayur has not sent any message. She kept the phone on the bed. Just then there was an alarm.It was a message. She took the phone and checked the message. “sorry unable to come. I will call you later.”  That was the message sent by Mayur from his black Hundai Creta that was waiting at the end of the street to follow Manalini.

White Maruti desire was running smoothly on Noida express highway. A black Hundai Creta was following it.  Goyal sat beside Mayur. Mayur was driving the car. He was following the car ahead of him. He is maintaining good distance to avoid suspicion. Goyal said “10 lacs How could she give sucha huge donation. She must be a very munificient lady. Mayur I wish that you should leave this charitable woman.”  “Goyal saab have you heard the story of the goose that lays golden eggs? Only a fool cuts the goose.”  Then what would you like to do with her? what is your plan? Mayur laughed. 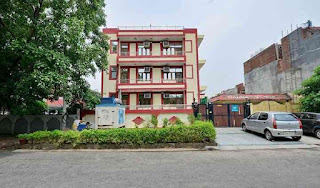 Mayur stopped the car at the hotel Silver leaf in sector 51 following the Manalini’s car.  Devaki and Manu alighted the car and walked in. Mayur signaled Goyal and Goyal followed them. A woman gang was waiting in the lobby of the hotel. It was a kitty party. There was an up beat weather in the hotel. Goyal came out and told what he had seen to Mayur. “ I have never been to a kitty party  but I heard so much about it. said goyal. Tell me what did you hear” said Mayur. “These rich women hire men and enjoy with them. kissing, touching and dancing together are common.”  Mayur laughed and laughed and said “ Arey dhed dimaak , It is a fallacy( false belief) and wrong notion. It is a total misconception of Kitty party.

Kitty means pool or collection( of money). It is an informal savings bank.  It is a rotating saving scheme for women. All members of the group contribute a certain amount every month to a member. That Kitty (pool money) is handed to a certain member. She will host the party. It is a way to socialize. It may happen in couple kitty parties that are getting popular.

Goyal : How long will the party last ?

Mayur: It may last two hours , should we wait two hours?

“You have to wait not I.”  said Mayur and handed over five two thousand rupees note to him.     Call me when party is getting to an end. Just then his phone rang “ Bhai Mayur Meghana and Mapuii are going to Delhi. They are getting into metro.” Said the voice.  “You follow them. said Mayur and left with his Creta. 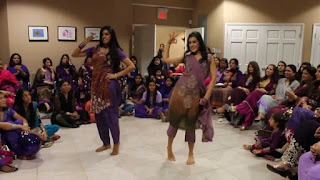 There was simple light hearted humour in the party. The women discussed their problems seniors gave counseling. Later they played word puzzles. There is musical instrument in a tea brand. What is that? Many people answered Taj. There is a fruit in a shoe polish. What is that? Cherry quickly answered Manalini. Word puzzles interested Devaki and Manalini. Devaki, though she was not a member, was allowed on manalini’s recommendation. Later some medical problems were discussed.

There is a gynecologist in the group who answered the women’s medical problems. Devaki and Manalini enjoyed word puzzles but the medical problems dulled down her spirits. Suddenly she heard the doctor say “you need not go to america for that surgery. That is not a complicated surgery. when we have doctors like Mayank in Delhi.” She reminded them of the most complicated surgeries he has done successfully but it is very difficult to get his appointment.”

Manu’s face brightened up. Devaki noticed that. The meeting was coming to an end. Some newly married naughty girls cracked adult jokes. two young women danced while most seniors watched.   A girl in light green saree said “Everybody has a gym room in the house. What is it called?  A girl in deep blue saree replied “It is called bedroom” All laughed.

Manu received the Kitty amount. More than the money it is the gynaecologist’s words that made her day. The car dropped Devaki in Noida and went towards Greater Noida. When the car reached Pari chowk a Man stretched out his hand for lift. Manalini asked the driver to stop.  Doctor Myank ! she said to herself and opened the door “ doctor saab come in” she said. “Don’t call me doctor all the time you can call me Mayank.” Manu folded like the touch me not plant with shy. She felt that her love was developing. He told the driver his address and took her to his studio. The driver dropped them and the car went away.

Posted by poolabala at 9:57 PM