It was 30th October.  Several software giants and other companies are celebrating Ethnic day. In IBM Noida the celebrations are on full swing. Different teams of software engineers joined together in the spirit of Ethnic day celebrations.  People coming from different regions dressed up in different colors of red, white, yellow, pink and green  but according their culture.  The office is vibrating with multi color and  ethnic style. IBM looked like a local carnival.

The day began with people of Jharkhand welcoming others with their tribal dance.  People of Himachal performed  Nati, the folk dance of Himachal pradesh.  Ankita and Anasuya  who are from Himachal were among them.  The Tamilian men who came in lungis peformed Lungi dance with “ Lungi dance... Lungi dance. It was  Rajinikanth's modern filmy song. “Since it was not a traditional song they proscribed it. Later Bharatanatyam was performed by Tamil girls Kunjal and Deepali. Wonder they both look alike. Every body thought they were identical twins. But they are not.  But Yogesh told that they were dopplegangers. After the dance Manu put them side by side and observed there are slight differences between them in nose, chin and lips. 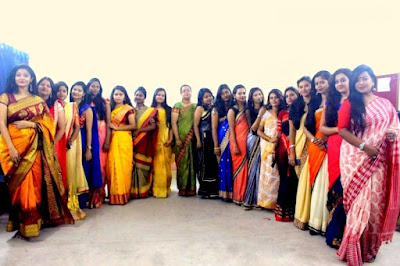 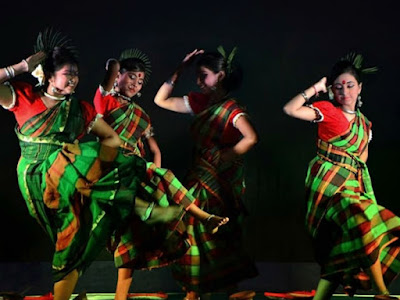 There are problems in dancing. Nobody knows dances. They have no idea about their own folk dances. Some people don’t even know the names. of the dances. From some states there are two employees and from from some states there is only one.  So the men and women were  coordinating with the person who is able to dance. Be it any dance. This is how the dance was going on. When Manu began the Ghoomar dance her colleagues tried to follow her but as the dance progressed the movements got complicated they could not follow her twists and turns.  On the path of dance they dashed each other and fell down.  That has brought laughter.

Manu announced that she would do Kalbeliya dance alone. “It is called snake dance or Sapera dance.”  Manu went into another room and changed to black dress. It was a body fit.  Somebody ran to his system and downloaded snake music and played it.  A full breasted woman Manu with a moon like face and charming curves is naturally attractive. In the black body tight dress she looked provocative. Any movement of her is gracious.  The music was slow at times and fast at times and Manu danced in accordance with the music.  Her body movements - back bending and stretching legs on the ground, rolling, twisting and crawling were agile.  She performed the traditional Sapera dance that stole the show and elated the spirits of the beholders.

The Andhra people  did not dance but welcomed the day with delicious ethnic food  garelu’, ‘payasam’, ‘pulihora’,  ‘bobbatlu’ - the mouth watering dishes.  Everyone in joyous mood. They hugged their  traditions.  They decorated the surroundings it to make it look like a festival of their own. 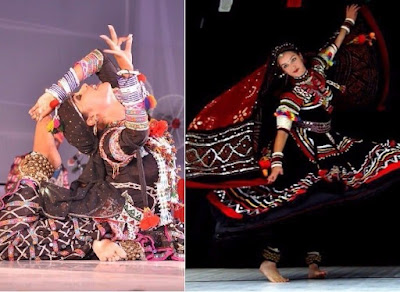 It was lunch time and the dances paused. The feast is going on. Everybody sat on the floor. Food is being served on banana leaves. "Is kalbelia a sensual dance?"  Anasuya asked Yogesh who is a jack of all trades . " Yes, it is. " said Yogesh. The Kalbelia tribe members have always had a spiritual connection with snakes. Ultimately, this history and connection paved way for the Kalbelia cultural dance. Snake dancing, culture and eroticism are entrancing elements of the Kalbelia dance.

After the feast is over they sat for a while narrating their folk stories. My mother told me the story of Panna Dhai when I was young. Said Manu.  It was the story of a maidservant. She had the duty of upbringing of the Rani Karnavati’s sons, Vikramaditya and Uday Singh.

Mewar was ruled at the time by King Vikramaditya, Rani Karnavati’s eldest son. Banvir, a valiant soldier, was chosen to be Vikramaditya’s protector. Instead of protecting the royalty, he took advantage of the situation to further his own ambition. He thouught “If   I kill Uday Singh and his brother there is no one in my way to become the king.” He secretly conspired to kill both. After he assassinated Vikramaditya, the maidservant saw Banvir coming for Uday sing.

She concealed Uday Singh in the basket. She covered him with fruits. Panna placed her own sleeping son Chandan, on the bed of Uday Singh, who was killed by Banvir. Panna Dhai saved the only living heir to the throne of Mewar Uday Singh and stood as a symbol of  ultimate sacrifice in the  memory of people for generations.

They had cultural programs in their auditorium till late evening. A skit was going on. The kannada group was performing it.  The Ethnic day was coming to an end. Mean time Yogesh who heard the news told the HR manager Mr Manohar about it. When Mr. Manohar announced it on the stage claps rained in the auditorium. It was the news of the chief Minister of U.P inviting Manalini to Lucknow to honour her service. The colourful ethnic day left a white track behind that looked like peace prevailing in the heart of Manalini.

Lavanya Apartments: Devaki was sitting in the corner on her bedroom. she bent her head onto her knees and hid her face.  The clock was showing 8.00 pm. Meghana brought food. She stopped at Devaki's door and was looking at the sorrowful face of Devaki. Devaki tried to smile but could not. A moment later Mapuii also came in. They sat beside her and asked her to eat. Devaki was reluctant to eat. "You did not eat in the afternoon, the food is still lying on the table. come on eat. I have brought fresh hot food for you." said Meghana.  Devaki did not budge.  "I am getting hungry. " pleaded meghana. 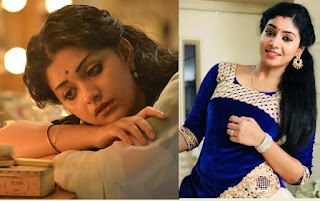 Devaki raised her head and looked at them. Meghana and Mapuii forced her to eat. Devaki started eating. Everyday you used to bring something for us. Today fortunately we have got an opportunity to bring food for you." Devaki was eating silently.   "When did this happen?" Asked Mapuii. "Afternoon at 2 O' clock"  Said Devaki. " We will go and lodge a police complaint. "Said Mapuii. “I am afraid we not complain, because he is my sister’s husband.” Said Devaki. “ O my God. Don’t show sister sentiment unnecessarily, when he has no sentiment.” Said May.   It is not a matter of sentiment, How many times I can go to the police? The material supplier had created the same  mess last week , we complained against him.

You know that  my garment’s contractor created the same mess last month. He forced me to accept monetary help.    I am ashamed seeking police help. so many times. The police are suspecting me."  "So what would you like to do?" Said Mapuii. “ tears were trickling down her swollen red eyes. " A woman without husband must die.” Said Devaki. “O my my how timid you are? Where is your kanhaya? What is he doing when his mother is facing all these hardships?” May shouted on her son.   “Don’t blame him. He remained unemployed for two years for me. Though he got jobs in other cities he did not join because I don’t want to leave Noida. after two long years I asked him to join anywhere.  Recently he got a job in Meerut. He live there and comes here weekly once to see me” Devaki said.   “Congrats to your kanhaya.  you go to your son he will take care of you. No, I cannot go because I lived with my husband here. I have the memories here. I can not leave.” said Devaki.   They were nonplussed. " Look how our literature has shaped the minds of women." said May. It is men who did it" replied Mapuii.   Silence reigned for a while.

Devaki started again " Ever since he finished his studies Kanhaya was always in search of two things either a job or a match". “Oh he was searching a match for himself?” “No he was searching a match for me. He used to baffle at the attacks when he was young. He could neither protect his mother nor console.  He always tells me “mom you beauty is a curse for me.”  “ That is why he asks me to get married." said Devaki.  He is very genuine.” Said May.

Devaki  finished eating and washed her hand. Why don't you get married? Mapuii said “Hai hai how can I marry now with a grown up son? If our relatives question me what answer I have? There is nothing wrong in getting married. Nobody is going to ask you anything. They don’t have so much of time. They have their own affairs, like you sister’s husband who jumped on you. Once we must meet kanhaya. He is a true son who want’s mom to live her life. He is one of his kind. Mapuii and May  left for their flat.