Greater noida 8.00 pm. As usual there is little traffic on the roads. The roads wear empty look. The bars and restaurants grew busy. Scarlet restaurant is full with boys from greater noida. They came from different parts of India live in hostels or private rooms and study    in the local reputed colleges such as Sharda university, Bennet University, Shivnadar University, Amity University, Galgotias, IIT and ITS and many more. The tables in the bar are full. The servers are busy. 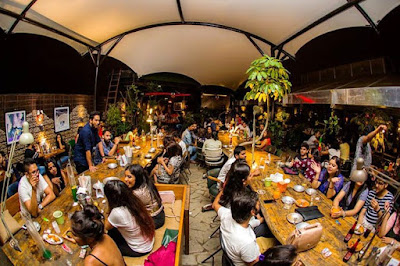 May was walking in the scarlet bar street. It was wide street with trees on both sides. There was a big open space in the corner. Two drunken girls are staggering.  They are about to fall on the men walking towards their cars.

The girls are always like this drinking and losing balance and teasing men.  May spoke out. Just then two more girls came into the street. They said “ they are acting like drunk and they are not teasing men they are amusing them, look properly yaar. May looked at the girls “ Hi, Sheetal and Shivani How are you? . They cheered up. The three girls looked at the drunk girls. They stopped a man kissed kissed and hugged him and asked for money. He gave them five hundred note and got into his car. May was shocked Sheetal and Shavani laughed. “ This is common here. They said. They entered the bar. Sheetal said to May you got a call center job and you are earning happily. They too need money.

You think call center job is happy! You know how difficult it is to work in a call centre? For the last three years. I changed six companies. Handling the calls and customers is more difficult. Handling team leader is the most difficult.  You are medical students you don’t know my problem. Said May.

You are an engineering graduate. Said shivani. “It is only for name sake. I have no knowledge. I could not clear my exams in time. Each year I had many backlogs. I could not get a good job due to backlogs.

Sheetal and shivani are looking at the door frequently. The waiter came to them and asked “what is your order?”  “Just wait a minute. We are waiting for somebody” The girls said. The waiter has gone  to the next table.

Sheetal : May you are not seen for a long time. Are you in Greater noida?

Shivani laughed at that question and said If May were in Greater Noida she would visit Scarlet bar on Weekends.

May: Six months ago I joined in Noida company but commuted from Greater Noida. Only two months ago I moved to Noida to avoid daily travel. Of course    the call centre provides cab but it is also a question of time.

Sheetal : Good you need not travel 25 km every day.

May : But last week I joined Greater Noida call centre

Now both sheetal and shivani laughed and said “ again you have to travel everyday. “But I don’t mind traveling because the company provides cab and good salary too.” said May happily. “ Then you have to give us a party” said Shivani.

We will think of it next week. You finish this week party. I must move to the next table my team leader has parked his car outside. He is coming in.

"Hi Meghana" said a tall man as he sat in front of Meghana. "Call me May" said Meghana. The man laughed and said “ That is for your call centre name. As a call center team leader I have seen  many boys and girls changing their accent and names but that English accent and name is limited to job. Of course Om you are right the English accent is limited t the job. but the name is for my life.  That is fine May. Said Om.

The waiter came to her table.  Meghana ordered a 8.00 pm whisky quarter bottle for Om and blue ribon gin for her and chicken tikka.  In a few minutes the waiter came back with her order. Om was watching the girls at the next table. Om Om are you here you are lost? Om looked at the table. The whisky was ready in his glass. May had gin in her glass. They said cheers to each other and began drinking. When the first round is finished  Om said “the waiter went to the girls three times for order. But these girls have not ordered anything.

Meghana “They are students of dental college. They are waiting for their room mates. Now a days girls  are spending a jolly life. Said Om.  May responded you have misunderstood; they live in private apartments with boys. They are waiting for their boyfriends. Girls and boys are living in the same room? I am really surprised.  Said Om. That should not surprise you so much it is very common in Greater Noida. “ I am shocked said Om. You are too smart Om. you are not from a village.  You are from Delhi.” Said may. “ But I have not seen this type of girls in Delhi.” Said Om. Every. “ Come on, you want to listen from me fourth house in Delhi has a live together. Don’t you know that?”

Leave it. May but look at the girls. They are still waiting. Can not they pay for the food and drink?  Said om. “ When the boys are ready to pay for auto or bus fare. Why should girls pay. Om laughed and said ‘Now a days girls education is much cheaper than boy’s”  “ the boys fathers are charged double.” Laughed meghana.

May was looking at the door. Two boys entered the bar. They greeted Sheetal and Shivani. The girls were angry from some time but later they called the waiter. The boys placed the order.

I think you are also looking for someone. Is it your boyfriend? Om laughed.

You are not my boy friend but my boss. I don’t have boyfriends. Our culture is not like Delhi culture. “ I am sorry , I only joked “ said Om. I am waiting for my friend and roommate. She is now in Greater Noida. She is going to Noida. She will pick me up. When they finished mapuii came in and sat next to her. May introduced her room mate to om. “ hello I am om her supervisor.

You know about Manali and kyra and we both went to dwaraka. We wanted to have a drink but Manali had vrath today. If kyra doesn’t go home early manali won’t eat. Does kyra care for stuff like that? vraths and sentiments? Said May. “Yes. That is why we did not drink. Said mapuii

So you did not enjoy your Sunday? We had fun in dwaraka this evening. Said Mapuii. What fun in dwaraka?! What fun? May asked. Mapuii was irritated .   Why you go to Dwaraka occasionally, for the same reason we went. We had the same kind of fun. Said Mapuii sarcastically.  “I never went to dwaraka.” Said May.

Om said “ look the boysand girls leaving. Meghana looked at the table. They have left. “May did you have boyfriends when you studied? “ said om “ Even looking at them is wrong. Talking to them is a big mistake.  Our families are quite traditional. my parents  taught me high values.” Said May.

Om's phone started ringing. He has cut the call. “That’s great Ma what about you? Said.  I have moderate values. My parents did not teach me such things. I have learnt from them the value of speaking truth.

He asked Ma to drink Mapuii refused. “ I came to my friend's apartment  this afternoon , I left the car at her apartment and we left for Dwaraka by metro. I came back to Greater Noida to take my car. I was going to Noida but May told me that she was here. I came here to pick her up to Noida. May ordered a soft drink for Ma. Om got a message in the phone. I must leave. Can you come to the car I must tell you something. Mapuii was still drinking soft drink. May accompanied Om to his car. They both got into the car. Mapuii was looking at the car. When she returned she was surprised to see kyra with Mapuii. When didi you come? May asked “ jut now “ replied Ky.

Posted by poolabala at 4:00 AM