Greater Noida Jalvayu vihar : It is rainy Sunday morning of August. Kyra woke up late at 8.00. She pulled out her mobile from under the pillow and checked out the messages. There are a dozen messages after 12.00 pm. All are sent by Mayur. “I chatted with you until midnight and it was not enough for you” kyra spoke out these words looking at the messages in her phone. She kissed the phone and typed one message as reply to all. “I will fix the rendezvous at 10.00 am.” Scarcely did she push the message than she heard tinkling sound of bells from the pooja mandir.

Kyra looked at the  clock and jumped out of the bed. She ran to Manalini and said “ Aaj koi vrath nahee hai naa?  Meaning  today there is no Vrath isn’t it? Manali looked at her seriously and started giving Aarti. She was turning the  burning camphour in a plate around the photo of Santoshimata. “jai santoshimata… Jai jai santoshimata… apane sevak janki sukh sampatti data, Jai jai santoshimata…” she was immersed in singing. Kyra was amused at her devotion  but bemused by her voice. Manalini got off from the floor and said she saw the bemused look on Kyra’s face and said seriously “ kya dekh rahey ho! Mere muh pay bundar nachtey hai kya?! ( why are you staring at me ?  You see monkeys dancing on my face?)

Kyra: you are singing like Anuradha paudhwal. Why don’t you try in films?

Manalini : jokes apart , It is 8.00 am already. You wake up so late! Cannot you wake up early and do some pooja. Manalini shouted.

Kyra: You have no Vrath today, right? Today let us eat chicken.

You have not taken bath yet , you are asking for food? Dirty girl go and take bath first then talk about food. Manalini dismissed Kyra’s discussion. Just then Mapuii entered.

Mapuii: Oh ! look at her face. How small it became. Why should you refuse a small girl’s desire. She asked for chicken nothing more. Mapuii said with the softest voice possible , in the most friendly manner. Kyra went to bathroom.

Manalini : She is a small girl, and you are another small girl. Look Mapuii Last week she took three leaves. Do you know why? “I don’t know” said Mapuii

Manalini: She had fever. She asking for chicken and you are supporting.

Mapuii knew the reason behind the three leaves. She started giggling softly. Kyra came out from the bathroom half naked with a towel wrapped around her breast. Her breast looked bulged. Mapuii said looking at her “good development.”

Mapuii laughed and said “ You should ask who is the boy frined when I said good development.

Ky: why did not you bring May with you Mapuii.

Mapuii: Her boss Om called her up. They decided to have breakfast together. She will meet us in the evening. Do we have sitting?

Manalini brought keera ( sweet) in glass bowls and placed them on the table. Ma and Ky immediately taken keera into their hands. Oh delicious! Exclaimed Mapuii. “She is indefatigable cook.” Said Kyra.  Manalini caught kyra’s ear between her fingers and said, “stupid girl! Am I jealous of you?” Noooo… noooo shouted Kyra. Please keep wearing sarees from now you look like a complete woman.  Manalini pampered Kyra like a small kid.

Just then Manalini’s  phone rang. “ haan jee pitaa jee.. she started speaking with her father. How is your job ? is everything okay? “ her father spoke for two minutes. And gave the phone to her mother. It is weekly routine for them. When her mother came into line Manalini’s face was brightened up “ Manu Beta ghar kab ayogee ?”  she was asking Manalini to visit home Manalini was not ready to go. Nayee project work khatam honeke baad mein aavongee” sadi Manalini.

Her mother “ phone thu us ladakee ko do”  (give the phone to the girl) Manalini gave the phone to Kyra.  “ Manu ko thoda samajaanaa betee” said Manalini’s Mother. “Kaha manatee hai tere bacchee..  phir bhee koshis karoojee“ said kyra and spoke for a while. After speaking with parents not only did Manalini show signs of contentment but also Kyra and Mapuii. “I am goint to Shiridi Saibaba mandir in sector 40. I will come as soon as possible and prepare lunch but don’t expect chicken.”  Manu Manu we eat lunch outside.” Said Kyra. Mapuii also pleaded for the same.

Alright! You should be home for dinner.  If you go out after dinner I will break your legs Manalini warned them with the air of a military commander. Kyra looked offended. Manu observed this and said “Look kyra, your team leader Prasanth was worried about the completion of the project. If you take more leaves what happens to the work? Manjaa beta manu touched Kyra’s chin and pleaded. She looked at her watch and said “ It is getting late, I must move.” She has left.   When Manalini left Kyra said “ It is getting late for Mandir, uh Shiridi saibaba will be waiting for her. He will put late mark for her.” Mapuii laughed and laughed and said “ She will soon become a team leader.”  “If she were my boss I would run away. Joked kyra.  Manu’s love and warmth is felt  clearly by the duo.

This evening are we going to Dwaraka? Said Mapuii. I am afraid we can’t. for two weeks you are showing no interest in Dwaraka , what is the matter baby? Kyra kept mum. Mapuii said again “ I guessed it when I saw you in the saree. Um where is the need for massage. As long as you enjoy everything is alright, but you look different and seem to have changed your line.” Sai Mapuii and kept staring at her from top to bottom.  Kyra looked hesitant for a while later she said “Mapuii you are my close friend so I want to tell you something, I think I am in love with Mayur.”

Manu alighted the bus in Noida sector 37.  There are 18 buses that go from greater Noida to Noida. Most of the buses from Greater noida go direct to sector 37 but not 40. She looked at the watch. It was 10.00 am. She decided to walk up to Shiridi Sai mandir which is two kilometers. She took 10 minutes to reach the Mandir. When she saw the Mandir she remembered the smiling face of doctor Mayank. Three days ago when she came to Baba to pray for Kyra’s health she saw him here. Again she remembered Kyra. She fell ill three times last week and went on leave. Poor girl, she lives far away from parents. Again his face flashed on her mind. He wanted to talk to me but I came with my colleague Anasuya. So I could not talk to him but exchange glances. Oh how nice it will be to meet your beloved at in the vicinity of your beloved God. 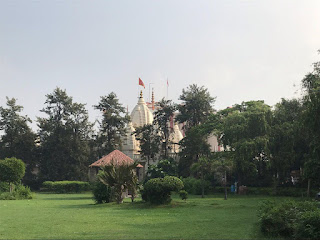 Like a spider withdraws its web, Manu has withdrawn her web of thoughts and entered the Mandir’s large hall where the devotees sat on the marble floor. Many devotees are going to the spectacular idol of Baba. Some of them touching the feet and some of them are placing their heads on Baba’s feet.  Manalini sat beside a devotee, a red saree clad. They looked at each other and greeted each other with smile. The Bhajn was going on. She participated in the bhajan with enthusiasm and devotion. The bhajan lasted for half an hour. They both got up and prostrated at the feet of Baba. Later they took Prasad( eatable offered to god) and exited together.

Manalini: Do you visit this Mandir often I have not seen you?

I usually visit hanuman Mandir. It is the biggest Mandir here. Where are you from?

I am Manalini from greater noida. But I work in Noida.

I am Devaki. I live in sector 63 10 kilometers from here.

They both walked into the Sai Vatika park which is adjacent to the Mandir. It was a big park with several green trees and sprawling green lawn. There was a big fountain with water raising form it. In the other corner there was play equipment. They saw children playing on it. 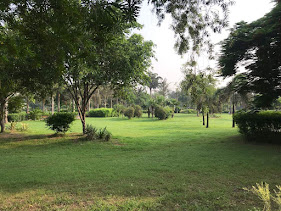 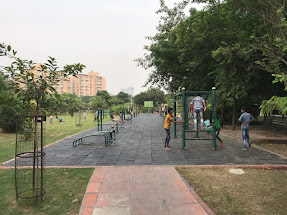 “What are you doing? Manaliniji”   “I am working in IBM. “please call me Manu, don’t use jee. I am younger than you.  “Ha ha ha but you are working in a big company, more over you must be having a fat salary! And you must be having a big car Devaki was speaking  in a flow. It started raining suddenly. Early morning it rained a little and stopped. Now it is raining. Actually I want to go to Sri Krishna Mandir. Said Devaki. If you don’t mind I will take you by my car said Manalini. They both came out. Manalini hired a car and they proceeded to Youth for Seva in a far away school. 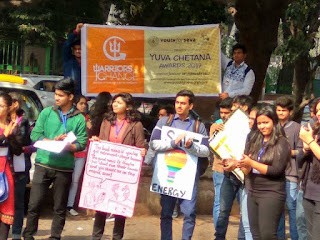 When the reached the school several young girls and boys were holding banners in their hands. Manalini’s taxi stopped at the school. They entered the school. She was one among the several volunteers. Devaki understood that the programme is all about serving -educated youth teaching the poor children.  Manalini taught for an hour like many other volunteers. Devaki was sitting under a mango tree and watching Manu teach through the window. Manalini came outof the classroom and met Devaki. Don’t you have a car? She said. No , I travel by bus or I walk. Let's go.

When they were going out an old man has called her into another building in the school compound. It was well furnished and looked so decent. Several people are sitting in the auditorium. There was a dais too. The felicitation programme started with all its features. But fortunately there were no lectures. They lighted the lamp. Prayer was offered. Later they quickly started calling the names. After calling three names, Manalini’s name was called. She was invited on to the dais cordially. Manalini was felicitated for volunteering. A shawl was thrown over her shoulders and a memento was handed over to her. There was press coverage too. 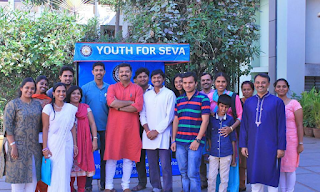 Devaki was shocked and surprised. “We have to eat together and today you must be a guest in my house” She invited Manalini for lunch but manalini took her number and promised to visit some other time.  She was calling for taxi again. Devaki refused “ you are calling the taxi for me it is not for you right I too can travel by bus” Devaki was protesting but Manalini paid no attention to her words. The taxi came the two women got in the taxi moved.  After dropping Devaki at sector 63 Manalini was on the way to greater noida.
Posted by poolabala at 8:01 PM